Ten Reasons Why I Absolutely Love the Masters

I can’t wait for the Masters to start this year. With Tiger, Rory and Phil playing well, 2013’s version should be phenomenal and most likely, as usual, will come down to the back nine on Sunday. 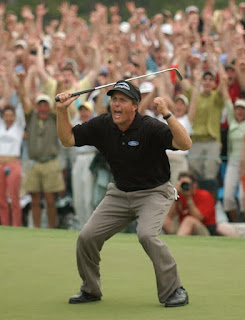 One aspect of the Masters’ appeal is that while many things in America are changing at microwave speed, the tournament and it’s setting remains transfixed in another era. From its Magnolia Lane, a picturesque and darkly shaded boulevard leading up the clubhouse, to the blooming, colorful azaleas, to the green blazer awarded the champion each year, few things seem to change.

To fans, the Masters retains its aura because—except for the first week in April—the public is rarely exposed to the Augusta National golf course. The club has repeatedly refused deals for licensing agreements, and the only place you can get Masters memorabilia such as hats, visors and shirts is at the tournament.
Here are my top 10 reasons why I love the Masters:
Knowledgeable and polite golf fans.
I know it sounds elitist, but keeping drunk, rowdy, golf illiterate fans away from Augusta National is a good thing. I love the fact there are no beered up clowns yelling “In the hole” on par five tee shots or “You da man” to everybody inside the ropes.
Champions Dinner on Tuesday of Masters Week
What a great tradition? When you win the Masters you become a member of golf’s most exclusive club. One of the perks is the previous year’s winner gets to select the menu (and pick up the tab) for the annual dinner. Some of my favorite selections include Tiger Woods’ cheeseburgers and milkshakes in 1998 when he was 22 years old; Jose Maria Olazabal’s Paella (a Spanish rice dish with seafood) in 1995 and Ben Crenshaw’s Texas barbeque in 1996.
No corporate signage
One of the reasons Augusta National is so pleasing to watch on our television screens is the total lack of corporate signage. It’s one of the few places left in America where you’re not subjected to some sign wanting to sell you something. With pop up ads on the Internet, intrusive advertisements at movie houses and endless signs and corporate tents at your typical PGA Tour event, it’s a welcome reprieve to see Augusta National, a throwback to a simpler time.
Par Three Contest
You can see the joy on the player’s faces as they walk around the course accompanied by their small children, who are wearing mini-sized caddie outfits. The event was first held in 1960. The course designed by George Cobb plays over DeSoto Springs Pond and Ike’s Pond, which is named for President Dwight Eisenhower. One of my favorite bits of Masters trivia is that no winner of the Par 3 Contest has ever gone on to win on the big course. Another great bit of Masters trivia: How many hole-in-ones have been scored on the Par 3 Contest? Give up? 70.
Caddie coveralls
While the green jacket is the most renowned Masters fashion statement, the white coveralls worn by the caddies instantly tell you this tournament is “a tradition like no other” to borrow a Jim Nance phrase. I love watching the golfers walk down the verdant fairways next to their caddies, who wear green caps and the white coveralls with the name of their golfers on the back in green lettering. While PGA Tour caddies have pretty much taken over the caddie duties, the old-time Masters caddies like Stovepipe, Pappy, Iron Man, Cricket and Cemetery will be as much a part of Masters lore as Amen Corner and Magnolia Lane.
Azaleas and magnolias.
I never get tired of seeing the bright azaleas that accent the golf course. Nothing signifies spring better than these brightly colored plants that provide the perfect color contrast for the verdant green surroundings. What I learned recently was that the golf course was built on land that previously served as the first nursery in the South. Through the years, more than 80,000 plants of more than 350 varieties have been added to the grounds.  The 61 magnolia trees that line Magnolia Lane are an awesome sight as well.
Real food and real low prices
Forget about hot dogs and hamburgers at the Masters (the smoke from the grills would presumably damage the garden-like ambiance), the real concession star is the pimento cheese sandwich that sells for $1.50. Yes, $1.50. Masters concession prices are stuck in a time warp. While other major American sports events have introduced price gouging to new levels at their concession stands, the members at Augusta National seem to care less about turning a profit on their concessions. Other $1.50 sandwich selections include egg salad, tuna salad and turkey. Want a brewski? How about two bucks?
Ceremonial honorary starters
I absolutely love the concept of having golf’s great past champions hit the ceremonial first shot. This year Arnold Palmer, Jack Nicklaus and Gary Player will share the honor. The ritual started in 1963 and through the year’s greats like Gene Sarazen, Byron Nelson and Sam Snead have participated. Sadly, between 2002 and 2007 the tournament didn’t have an honorary starter. In 2007, Palmer accepted the invitation after declining it in the previous years. Now, this year with Arnie and Jack it couldn’t be better. They represent everything that is good and wholesome about the game and its great traditions.
No tickets
People adore and want what they can’t have, right. The Masters definitely falls into that category. It’s the toughest ticket in sports. There is a waiting list but it was closed in 1978. Even if you open up the list, thousands of names are already ahead of you and me. You have a better chance of getting tickets to the Super Bowl, World Series, or NBA Championship than to the Masters.
The Green Jacket and other awards
Even the poor slug who can a barely tell the difference between a tennis ball and a golf ball knows about the green jacket awarded to the winner of the Masters. Most people don’t realize there are a host of other prizes at the Masters. For instance, the winner also receives a gold medal; the runner-up receives a silver medal and silver slaver and each day’s low score is awarded a crystal vase.