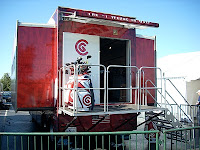 For those in the golf industry an introduction to the PGA Merchandise Show in Orlando is not necessary.  However, for those outside the industry I’ll provide you with a short overview and what I anticipate seeing at this year’s show. Why? Because, unfortunately, the public is not invited and security is tight.

Staged at the end of January at the Orlando Orange County Convention Center, the PGA Merchandise Show attracts more than 40,000 movers and shakers, PGA Professionals, manufacturing executives, retailers and a few wannabes who want to get into the golf business.

Next week, right here on this blog, I’ll provide you with an in-depth look at what’s new in golf in 2010.

Now, back to the show.

There are 10 miles of show aisles with every thing from the latest forged irons and titanium head drivers to ancillary golf industry products like cigars, single malt whiskeys, wine produced by PGA Tour pros, wacky headcovers and golf range tractors. The bottom line is, if you’ve got a golf product and you’re not represented some way at the PGA Merchandise Show, you haven’t got much of a golf product. Some 1,000 golf manufacturers have a booth or exhibit space at the show. In addition, there’s an outdoor Demo Day at Orange County National Golf Center where retailers and media types can try out new equipment that will begin appearing at stores in late February and early March, a variety of education conferences, a career fair, a concert featuring the rock group “Kansas”, a PGA Forum Stage, a new product center and other activities.

This is my 13th year to attend the PGA Merchandise Show and I look forward every year to renewing acquaintances with other writers, public relations pros and other golf industry people I’ve met along the way.

Here are some of the new products I’m looking forward to seeing this year:

Drivers: The new TaylorMade Burner 2010, which will appear in shops in February, the Speedline Fast 10 driver by Adams and the Ping G15 driver.

Irons: For low- to- mid-swing golfers, Wilson Golf has come up with the new D-FY iron, an iron and hybrid combination that features at half steel/half graphite shaft. It’s different and I’m like to see if it really works.

Fairway Woods: Do you consistently hit the ball to the right? If you’re a hacker like me, you probably do. Apparently Nike is doing something about the problem with their new adjustable VR Fairways woods, which allow you do dial the face slightly to the left.

Teaching aid: The product sent me a pre-show press release that promises to take 5 strokes off everybody’s golf score. Accuputt is an indoor golf putting system involving some sort of invisible laser line. In their media release they state “95% of golf testers reported lowering their average putts per round by 5, in actual golf course play, after using Accuputt for just 15 minutes daily for 30 days. This I gotta see.

The Wacky: Every year there are a host of companies hoping to capitalize on niche markets. Here are a few of booths I look forward to visiting:

Tattoo Golf-Debuting at the show, they boast “a unique line of aggressive golf clothing”. Their logo is a skull with crossed clubs and I’m assuming they’re hoping a lot of Black Sabbath, Van Halen and White Snake fans play golf.

Golf Genie-An iPhone application designed by PGA instructors for on-course use and off-course preparation. It has advice on golf shot club selection, setup and execution and helps to fix problem swings. According to the company’s pre-show release, the Golf Genie sold out its first run in less than two months.