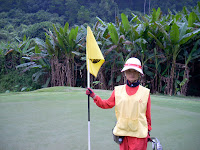 While Scotland will always be a favorite international golf destination for Americans, there are a number of destinations vying for American golfer business. Foremost among the international competitors are China and Thailand. Both of these countries continue to build golf courses and resorts that appeal to American tastes. Not surprisingly, the Asia-Pacific region has overtaken North America as the world’s largest travel market with 647 million passengers in 2009, according to the International Air Transport Association (IATA). In early May, the first Southeast Asia/India Golf Merchandise Exposition in Bangkok, modeled after the PGA Merchandise Show in the U.S., will debut.

WHAT HAPPENED TO MY RESORT?

Back in 2008, AIG, which received $180 million in taxpayer assistance, was exposed for planning a high-end sales retreat at the St. Regis Monarch Beach Resort in Dana Point, California. That debacle set the stage for criticisms from government officials and others about luxury conferences. Suddenly, and wrongfully I might add, the word “resort” became a bad name, one that implied needless and opulent spending for business groups. The result is some properties are dropping the word “resort” from their official name. Among those who changed their name are Ballantyne Hotel & Lodge in Charlotte, North Carolina, Loews Lake Las Vegas, Loews Ventana Canyon in Tucson, Arizona, Loews Coronado Bay near San Diego and Westin Stonebriar Hotel in Dallas.

Golf course construction is flat in the United States. With the exception of a few courses that debuted last year, the Pete Dye Course at French Lick Resort in Indiana and the Waldorf Astoria Golf Club in Orlando come to mind, there aren’t going to be a lot of new resort layouts to play this year. One worth waiting for is the fourth course at Bandon Dunes Resort in Oregon, the Old Macdonald, which is scheduled to open in June.

France is quickly making its mark as a top golf destination in continental Europe. Several of its courses consistently make it into Top 10 lists, including Morfontaine, Les Bordes, Chantilly (Vineuil) and Golf National (L’Albatros).

WHAT THE EXPERTS THINK