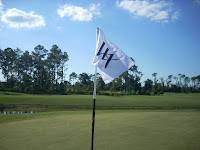 I attended the star-studded opening of the Waldorf Astoria Orlando earlier this month. Political luminaries like Florida Governor Charlie Crist and golf course designer Rees Jones were in attendance for the ribbon-cutting.

In between a lavish dinner at the Bull & Bear Steakhouse, cocktails at Peacock Alley and breakfast at Oscar’s, I didn’t have time to play a round of golf on the resort’s new course. I did, however, take a cart tour and spoke briefly with Jones. I was very impressed.
I’m itching to play the 7,108-yard layout. The course weaves through giant stands of pine and cypress trees and Jones did a great job of utilizing the land’s existing contours. Winding through a large wetland preserve, the courses has a par 72, slope 139 and 74.6 from its professional tees. There are five sets of tees so all playing abilities will find it challenging as they want it to be.
Jones is a master at designing courses for the ultimate user. I believe Waldorf Astoria Orlando Golf Club will easily take its place as one of Orlando’s top resort layouts.
The Waldorf Astoria Orlando and the Waldorf Astoria Golf Club have put together a special introductory offer for golfers. The WA Golf package includes accommodations in a golf-view room at the Waldorf Astoria Orlando, two rounds of golf, and a $20 dining credit per person with rates beginning at $329 per room, per night, based on double occupancy. The offer is good to December 24, 2009. Cal 1-800-925-3673 or book online at www.waldorfastoriaorlando.com