Yeah, yeah, I know the term “Guru” is a bit pretentious, but I think I’ve earned the moniker through hard work and, well, traveling the globe for nearly three decades visiting golf resorts and destinations and writing about them.

I started playing golf as a kid at Mohawk Golf Course in Tulsa, Oklahoma. It was a tree laden muni layout with shaggy greens and more Joe Golfers than Joseph Golfers. Back then, playing with my older brothers and friends, golf was pretty much a blood sport. We used to wrestle in the bunkers when we perceived cheating or some other injustice by another player.

My first introduction to people who really took golf seriously was actually through baseball, believe it or not. During my teens, I was the visitor’s clubhouse boy for the Tulsa Oilers minor league baseball team (a farm team of the St. Louis Cardinals) and I marveled at how many of the pitchers loved to tee it up between starts. They showed a true passion for golf and something clicked and I became more enamored with the game, too.

Fast forward, I attended and graduated from the University of Tulsa. Forget student loans, I worked my ass off at virtually every job you can imagine. My college work resume included fork lift driver, flower delivery guy, grocery store clerk, assistant to an English professor, house painter and newspaper delivery person to name a few. My degree is in speech communications with a minor in hops and barley.

After graduation, I worked for a city magazine and ran the valet service for a large Las Vegas style nightclub (Ziegfield’s) in Tulsa. During that time I met and spoke with all types of big name entertainers like Rodney Daingerfield, Larry Gatlin and Leon Russell.

I’m a big high risk/high reward guy on the links and often carry that over to my personal life. I bolted Oklahoma in the mid-1980s (my wife and I sold pretty much everything we owned) to work in Heidelberg, Germany as a travel writer for various American publications.

While in Europe, my travel writing career took off as I wrote about everything from “Shopping in Milan” to “Bass Fishing in Spain”. I got into golf travel writing in an odd sort of way. One of my editors offered me an assignment writing about golf in Mallorca. I’d never written a single word about golf, but accepted anyway. Uh, after spending a week on the courses and at the beach in Ibiza, I quickly realized golf writing was a pretty solid gig.

We moved to Orlando in the mid-1980s and I absolutely love the city. It has been great to me on a personal and professional level. I’ve written thousands of articles and columns, three books and worked on a freelance basis for great companies like Golfweek, Walt Disney World and Universal Orlando. My byline has appeared in Golf Magazine, Travel Leisure Golf, Robb Report, Spa Magazine, Islands Magazine and numerous other publications. I’ve interviewed a Who’s Who list of golf icons including Arnold Palmer, Jack Nicklaus, Tiger Woods, Greg Norman, Gary Player, Nancy Lopez and Payne Stewart to name a few.

When Tiger Woods arrived on the scene in 1996, the golf world exploded in so many ways. I started writing feverishly about new golf courses, golf communities and golf travel destinations. Like many in the golf industry, I thank Tiger for propelling the game to a new level on and off the course. 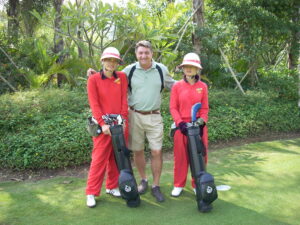 I started this blog on a whim nine years ago when I realized I had a lot more to say than what I was writing in magazines and on other sites. Little did I know that so many people are interested in golf travel, wine and my other interests. The site has attracted over a million visitors since my very first post. To say I’m amazed and appreciative would be a vast understatement. Interesting, too, is that some of my readers don’t know a golf ball from a tennis ball. They just seem to like my writing style.

The Golf Travel Guru site is my way of giving back and imparting the knowledge about golf travel, wine, sports and fitness I’ve gained from circling the globe for the past 30 years. It’s probably no surprise I’ve played in golf travel havens like Scotland and Ireland numerous times, but I’ve also teed it up in exotic locals like Kenya, Morocco, China and The Canary islands to name a few and visited wine regions in France, Italy, Germany, South Africa, Argentina, Portugal and Napa/Sonoma in California. 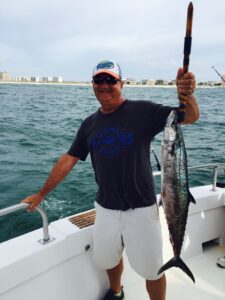 Hey, thanks for taking the time to read about The Golf Travel Guru. Enjoy my blog and I hope to see you on a fairway or at a vineyard one of these days.

All the best…
Ed