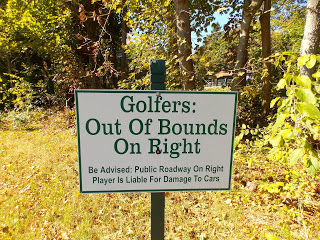 1.Yells “Fore” Before Golfers Tee Off

These are the numbskulls that simply can’t resist screaming “Fore” when driving by a golf course and they spot a golfer about to tee off. They speed away laughing uproariously at their wit and ability to possibly derail the unsuspecting linkster. Hey goofballs, it’s just not that funny.

Their number one goal at a PGA Tour event is to get totally hammered on Michelob Ultras and then start yelling stupid phrases while golfers are teeing off. You know, such witticisms as “You Da Man”, “Mashed Potato”, “Cheeseburger”, “Baba Booey”, “Get In the Hole”, “Yabadabadoo”, “Taste the Rainbow”, “Boomshakalaka” and “Dr. Phil” (When Phil Mickelson is on the tee) to name some of the more popular.

Non-golfer guy loves to compare golf to bowling by insisting drinking is an integral part of the overall experience. There’s one very distinct difference. Getting drunk at the bowling alley results in gutter balls and hot dog relish stains on monogramed bowling shirts. A few wee nips on the golf course is called swing oil and typically generates a smoother swing and a few birdies.

Rest assured, non-golfer guy will never inquire what brand of golf ball you prefer. Consequently, you’re going to receive some off brand or Rock-Flites that’ll you never use except maybe for your shag bag or you’ll let your dog “Bogey” play with them. The most difficult part is being a fake and a phony and telling your non-golfer friend that you’re hitting his gift golf balls 20 yards farther.

5.  Hates to Even Visit Topgolf

Some non-golfer guys have such a disdain for golf they’ve can’t even force themselves to visit Topgolf. Not sure why they don’t like drinking Moscow Mules, noshing on cheesy macaroni bites and hitting to lighted targets. But, to each his own.

If you ask him to name his favorite movie, guaranteed it’s gonna be Legend of Bagger Vance and not the greatest golf movie of all time, Caddyshack. Non-golfer guy thinks the snoozer Bagger movie, directed by Robert Redford, is the golf equivalent of baseball’s “The Natural”. It is not. Bagger was a box office bomb and deservedly so. Caddyshack addresses caddying, gambling on the golf course and maintenance workers in a marvelously funny and entertaining way.  The movie pits the snoo-tay country clubber Judge Smails against the clownish interloper Al Czervik. It’s basically Joseph Golfer v. Joe Golfer in a battle royale of hilarious scenes.

7.  Walks Dog on Course For His Daily Constitutional

Once the course has closed for the day, this guy rounds up Fido so his canine can make a deposit on some nice well manicured grass. Fido drops a load and his owner neglects to pick up and scurries off the course like any Olympic sprinter with a dog in tow.

8. Would Rather Play Golf Video Games

This is the closest non-golfer guy will get to playing golf. Ever. I’m thinking “Worms Crazy Golf” might be at the top of the list or “Golf With Your Friends”, where up to 12 people can play mini-golf on the screen. If you hate actual golf, I highly suggest the former which incorporates cartoons, worms, comic violence, humor, puzzles and the possibility of becoming seriously addicted to virtual golf.

9. Constantly Drones On About Golf Being Boring

I play lots of golf and even I can admit there are some boring elements to watching the game such as Jim Furyk endlessly lining up a putt, Keegan Bradley forever club waggling and Bernhard Langer strategizing his shots at a snail’s pace. Lee Trevino once famously said: “He was clean shaven when we teed off” regarding Langer’s sluggish progress. That said, golf is like any other sport or activity, from baseball to chess, it’s all in comprehending nuances and strategy. If you don’t know the intricacies of golf, it’ll appear as exciting as a Joy Behar makeover.

This guy is actually pretty smart and savvy. He doesn’t play golf, barely knows a golf ball from a tennis ball, but decides to play in the company scramble event. It’s agreed upon, he’ll just sit in the cart while one of the other three guys takes his swings. Non-golfer guy then relaxes on the passenger side with an ice chest full of brewkis and laughs his ass off as this “partners” flail way and record bogey after bogey in the scramble format. They’ll lose badly. He’ll win big time.