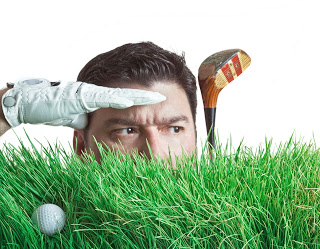 If you think Patrick Reed is the only person in golf who plays a bit loose with the rules, look around you. You might just end up playing with one of these characters some day in the near future:

It’s a scorching, humid day in August in Florida and this guy is still playing “Winter Rules”. To this desperate duffer, it’s always winter. No matter where his ball lands, he’s going to get free relief because, well, he’s just playing by the same rules all year long.

Let’s face it, wedges are hard to hit. The probability for chunks and skulls is high and strokes can really add up when you’re trying to escape from the woods, shrubs or some other hazard. That’s when cheater guy goes outside the bag for club No. 15, the legendary foot wedge. A quick soccer style kick and, voila, he’s back on the short grass.

Cheater guys hits it into the woods and can’t find his ball. It’s a pain in the ass to keep searching for the lost ball and it’ll probably be in a bad lie when he finds it. The easy solution is to pull a ball out of pocket (same brand, of course), place it down with a good lie, and chip out to the fairway to save a stroke.

When nobody is looking, it doesn’t count, right? This poor slug hits 3 inches behind the ball, digs up a massive divot and his ball  travels about 12 yards. He quickly scans to see if his playing partners are watching. Jackpot! They’re staggering through the woods looking for their own shots. No problem. He drops another ball, takes a whack and saves a shot.

This is the guy that hits a drive near the white stakes and hopes he’s in bounds by a few feet. Turns out, he’s out of bounds by a few inches. Oh, those cruel golf gods. After waiting till his playing partners scamper after their errant drives, he quickly taps his ball inside the stakes. “Wow, how lucky can a guy get,” he tells his fellow players when they get to the green.

This sleight of hand trick is a favorite when you want to move your ball a few inches closer to the hole. This is the guy who improves his 5 footer to 4 foot 9 inches and then promptly blows his putt six feet past the hole.

Getting the ball out of a bunker with a high lip can be very difficult with a sand wedge. The ol’ hand grenade shot in a deep bunker can produce marvelous results, save numerous shots and get rave comments from your playing partners about your vastly improved sand skills.

This is the move that made Patrick Reed famous or, uh, infamous. As Brooks Koepka said about Reed: “I thought the guy was building sandcastles in there.” If you’re a hacker cheater, I highly suggest eschewing the grounding club routine (leave that to the pros) for the quick and simple hand grenade launch out of the bunker while nobody is watching.

Move Ball Out of Divot Guy

He knows with absolute certainty that he can’t hit a ball out of a fairway divot. Thus, he moves the golf cart or golf bag (if he’s walking) next to the ball so his playing partners can’t see his shenanigans. Then, with the deft touch of a magician he quickly makes his ball disappear out of the divot to a nice clean lie a few inches away,

This is the guy who shanks his drive on the opening tee box about 50 yards right into the dense forest. He quickly turns to his group and says, “Hey, we’re playing mullies, right? That was just a breakfast ball. I didn’t have time to stretch and hit some balls.” He then promptly records a Snowman (8) on his card after several other dubious shots.