Home  >  Uncategorized  >  5 Reasons I Love to Watch Phil Mickelson Play Golf
1. He’s Phil the Thrill. He’ll try unbelievable shots some players won’t even attempt in practice.
2. He’s this generation’s version of Greg Norman, a pedal-to-the-metal player who can crash and burn faster than a NASCAR driver.
3. He has the best short game in the universe. Put a 60-degree wedge in his hands and he’s a Mozart in golf shoes.
4. Whether you think it’s phony or manufactured, Mickelson looks like he enjoys the game and the fans that follow him. He’s the antithesis of a particular surly golfer named after a striped animal. 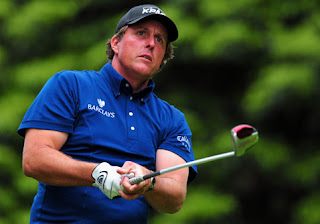 5. He’s the player to watch at the 2012 Masters. While Rory and Tiger will command most of the pre-tournament hype, Phil has been the best player in the Masters over the last five years. He won twice, had two thirds and averaged 70.40 per round.