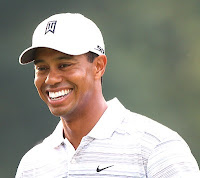 1. How many golfers have changed their swing three times–or is it 4? 5? 6? 7? —and still produces at a world-class level.

2. I like it when Tiger muffs a shot and almost blows a gasket. You gotta love the clubhead smashed in the turf move or the sailor-like (or is it the Navy Seal-like) vulgar language tirade.

3. He’s the only player who elicits genuine excitement with his post great shot antics. With the fist pumps and yelps he looks more like an NBA player after posterizing some poor slug.

4. I want to be watching when the “Old Tiger” finally returns. You know, the Tiger that sunk that unbelievable chip on the par three 16th hole in the 2005 Masters (watch the video).

5. I secretly love seeing him fail and wonder how he’ll ultimately overcome. Tiger has been blowing competitors away since he was 4 years old. Let’s see if he really does have a comeback gene.