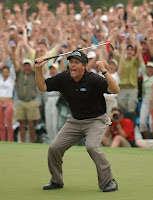 Is this the year we get an all-out battle royal at Augusta National between who most people consider the best three golfers on the planet?

Tiger is getting his game steadily together, highlighted by his amazing “62” at the Honda Classic. Rory has rebuilt his physique to complement his awesome game and he seems primed to close the deal at the Masters this year. Phil’s scintillating performance at the AT&T Pebble Beach National Pro-Am when he shot 8-under 63 to comeback from six strokes down signaled he’s hitting all cylinders in 2012.

Is this Arnie, Jack and Gary all over again?

That’s a quantum leap, I agree, but at least we have some anticipation the 2012 Masters will be a memorable one or, as Jim Nance likes to say, “One for the Ages.”

First things first, though, the “New Big 3” will tee up today at the World Golf Championships-Cadillac Championship along with former No. 1 Luke Donald, Lee Westwood, Keegan Bradley and Hunter Mahan.

In fact, all of the top 50 in the world are in this week’s loaded field tournament at Doral’s TPC Blue Monster in Miami.

If the “New Big 3” provides some fireworks this week, things will really heat up as we head toward Augusta next month.