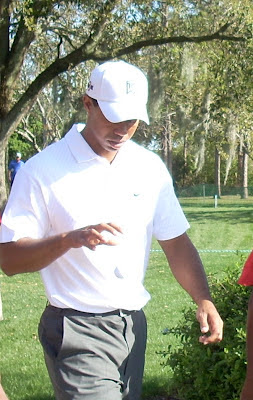 1. He’s brimming with confidence after winning at Bay Hill in Orlando two weeks ago. Reportedly, Woods was relaxed, smiling and focused during a practice round this Sunday at Augusta National. No doubt, the recent win put him in a good place mentally.

2. He wants to win the Masters and stick it to Hank Haney, whose just released book “The Big Miss” has portrayed Tiger as a self-centered cheapskate who almost destroyed his career by pursuing a fascination with the Navy Seals. Woods probably wants to win a Masters in the face of ex-caddie Steve Williams (who’ll be toting the bag for Adam Scott) as well. Remember, he had numerous disparaging things to say about Woods. Last but not least, he’d like to see the look on Masters chairman Billy Payne’s face at the green jacket ceremony. Payne publicly admonished Woods in the heat of the scandal.

3. He’s overdue. In the last six Masters, Woods has not finished lower than tied for sixth place. He’s had a T-2, T-3 and two T-4’s. Woods always plays well at Augusta National and this year will be no different.

4. Woods has finally figured out the driver. The wayward drives are no longer part of his repertoire. In fact, he leads the PGA Tour in Total Driving (distance plus accuracy).  He can basically grip it and rip it at Augusta National and almost always have a second shot. Even if he misses a fairway, there’s lots of leeway to recover.

5. He ranks first in the PGA Tour’s “Par 5 Birdies or Better Leaders”.  One of the keys to winning a Masters is making birdies or eagles on the fives and sinking clutch putts on pool table fast greens. If Woods putts like he did at Bay Hill, he’ll be wearing another green jacket on Sunday.