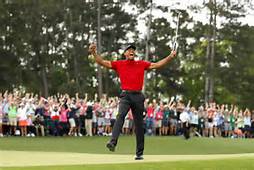 I don’t care if you hate Tiger Woods and think he’s a lousy husband who deserves bad karma the rest of his life or you’re a passionate fan who marvels at his success despite so many personal failings and injuries, you have to agree his comeback to win the Masters is as Jim Nantz would say, “One for the Ages.”

To return to glory from public humiliation, a broken marriage he caused, four back surgeries and a sad and pathetic mug shot that will live in infamy, Tiger had to somehow find the drive, focus and determination to climb back to the top of the mountain.

For a myriad of reasons, Tiger 2.0 is more likeable. He actually seems to be enjoying the ride this time around. Maybe he wants to win for his kids or he just didn’t want his legacy in tatters, but his drive to be the greatest is stronger than ever. Though I’ve been disappointed in Tiger like other fans, I just can’t take my eyes off the screen when he’s playing. Buckle your seat belts, too, because Tiger’s second act may be as exciting as his first.

Michael Phelps Watching Tiger at No. 16

The greatest swimmer in the world was on hand to watch Tiger win.

I loved seeing Lefty tooling down Magnolia Lane as he needles Matt Kuchar and tells everybody how “it’s bombs away” with his driver if he wants to win.

As a certifiable hacker, I was more than excited to see Zach Johnson hit the ultimate shank at the Masters.

A security cop goes rogue and almost takes out our champion.

Bryson Dechambeau hole in one at No. 16