Home  >  Masters  >  Can Tiger Woods Go Back-to-Back at the Masters?

So, with Woods being a 15-time Major winner and defending Masters Champion I was a bit uneasy when the pre-tournament storyline was all about Muscles DeChambeau, a bulked up, protein-shake-drinking behemoth that was taking names, kicking butt, launching 370 yard drives and almost making a mockery of short par 4s and par 5s.

Newsflash: Don’t ever doubt Tiger Woods. With a fused back, creaky knees and a litany of personal problems in his rearview mirror, Woods executed what many believe is the greatest comeback in American sports history at the 2019 Masters.

At this year’s November Masters, Woods arrived under-the-radar if that’s possible for him. There was such overwhelming interest paid to Popeye DeChambeau that many people forgot Woods is the defending champion.

Woods has made us all quickly remember that Augusta National always brings out the best in him. He’s playing in his 23rd Masters.

While Popeye imploded in the first round as his bombs off the tee constantly landed in the pine straw and tall pines, Woods traversed around the course with surgical precision.

Despite being the defending champion, Tiger Woods wasn’t expected to play well, but after day one, he certainly captured the attention of everyone as he ended up the day just three back of leader Paul Casey. Woods also improved his odds now +1800 after shooting 1st Round 4-Under 68 according to Sports Betting Dime. 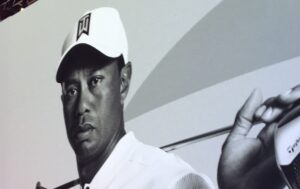 It was the second time in his career he’s broken 70 at Augusta National in first round play.

In Woods’ bogey-free first round, he hit 10 of 14 fairways and 15 greens in regulation.

While Woods only averaged 281 yards off the tee in his initial round compared to DeChambeau’s 334 yards, Tiger once again displayed that his knowledge of Augusta National is off-the-charts.

He never put himself in bad spots and was in position for lots of birdies.

After playing 11 holes on Friday’s round, which was halted by darkness, Woods finished his second round on Saturday morning at -5 under, just 4 shots behind the leaders.

The leaders at -9, which include Justin Thomas and Dustin Johnson, will be difficult to catch, but we’ve all learned to never count Tiger out at Augusta National.

Hey people, he knows every freakin’ blade of grass, mound and green contour on the course.

Woods has five Green Jackets and we all know he desperately wants number six to tie Jack Nicklaus.

I think he can, if he keeps playing precision golf and others wilt under the pressure of the final round on Sunday.