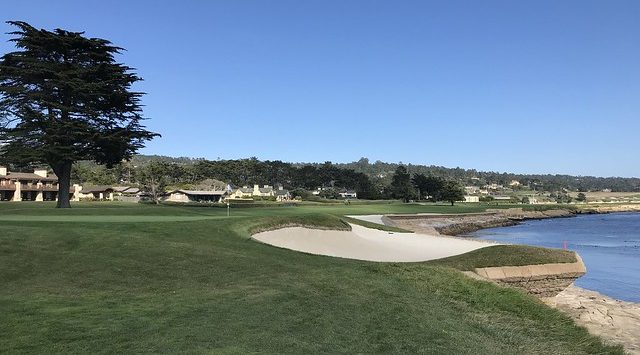 There are few venues in the world of sport as iconic as Pebble Beach Golf Links.

This stunning coastal location runs alongside Carmel Bay, which is four miles long and sits on the south side of the Monterey Peninsula, around 120 miles south of San Francisco.

The California beauty is one of the most famous golf courses in the world, and attracts thousands of tourists every year, some of whom bring along their clubs in the hope of booking a round.

And unlike many well-known golfing venues in the United States – such as Augusta National in Georgia, which is a privately owned club – Pebble Beach is open to anyone who is lucky enough to secure a much sought-after tee-time.

That said, for those who wish to chase eagles, birdies and pars, it’s certainly not cheap to sample the rugged California coastline, which borders the Pacific Ocean.

Green fees here are among some of the highest in the world and, if a visitor is unable to book a tee time at Pebble Beach, there are three other excellent links courses available to play: The Links at Spanish Bay, Del Monte and Spyglass Hill, which is one of three venues used each year for the annual AT&T Pebble Beach Pro-Am in February.

The other two courses include Monterey Peninsula Country Club and Pebble Beach Golf Links itself, which is the host venue of this famous event, which was first held before World War Two. As tournament host, Pebble has the honor of staging the final round of this popular pro-am.

And to celebrate its centenary this year, Pebble is also the location for the 2019 US Open, which takes place in mid-June. This will be the seventh time that Pebble Beach has held a major tournament – having previously taken centre stage at five US Opens and one PGA Championship.

One golfer who will hope to be in good form when the event begins on June 13th is Tiger Woods.

The 43-year-old enjoyed one of his most convincing displays here in 2000, when he won the US Open by a record 15 shots and was the only golfer in the field to break par for 72 holes.

After suffering a number of serious injuries, which derailed his golf career for a handful of years, Tiger claimed an emotional 15th major title in April when he won The Masters at Augusta National.

It catapulted him back to the forefront of world golf, as he secured his first major trophy in almost 11 years.

As a result of this popular victory, his stock is suddenly riding high again, and Tiger Woods odds for ending 2019 as world No 1 – for the first time in over five years – have promptly been slashed by Paddy Power, who are offering 7/4.

But if Woods will garnish plenty of support at Pebble next month, the sentimental favourite is likely to be Phil Mickelson.

Lefty has won the AT&T Pro-Am five times but never the US Open and, if he were to finally collect the only major title to evade him so far, it would be gratefully received on what would be his 49th birthday (Sunday, June 16th).