I can’t wait for this weekend when the best golfers in the world compete on one of its grandest stages, Pebble Beach Golf Links.

From the stunning aerial shots of Carmel and Pebble Beach to the announcers waxing poetically about the awesome surroundings to Brooks Koepka hitting bombs in to the Monterey Peninsula sky, this U.S. Open is going to be truly memorable and enjoyable.

There is no shortage of sentimental favorites this year with many fans pulling for a resurgent Tiger Woods,  Phil Mickelson to finally win a U.S. Open and Rickie Fowler to win his first major, but I just don’t see anyone denying Koepka who is on an unbelievable majors victory roll. Koepka has won four out of the last eight majors and is the first golfer in history to hold back-to-back titles in two majors simultaneously (U.S. Open and PGA Championship). Get this, in his last 16 majors, he’s finished T-21 or better an astonishing 15 times. He’s having a great 2019, too, with five top-10s this season.

I’m not the only one who thinks the hulking Florida bomber will walk away with the trophy at Pebble Beach, either.

Checking in with the books at SBD we can see that Brooks Koepka is a hard man to bet against. The 29 year old has won the last two US Opens, came second at the 2019 Masters and was victorious at the PGA Championship in May. Other favorites include Dustin Johnson, who plays Pebble Beach remarkably well; Tiger Woods, who leads the PGA Tour in greens in regulation; and Rory McIllroy, who is fresh off shooting a 61 on the final round and capturing the Canadian Open. 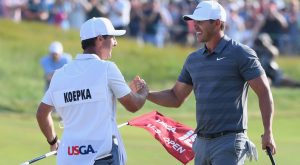 Koepka is primed and ready. Speaking at his pre-tournament press conference, Koepka said: “It’s a major championship. I’m ready to go. There’s a lot on the line. Going for three in a row. That’s very exciting. And I want to play well. This would be the coolest thing, to win three in a row and to win a third one at Pebble, I think that’s really — it’s such a special place. And to be as a little kid you always wanted to play a U.S. Open at Pebble. It’s kind of a dream come true, in a sense. And to even be thought of or to think of winning a major championship here would be incredible.”

It won’t be easy for Koepka or anyone else to win this year’s Open because Pebble Beach will be an ominous challenge. The rough will be torturous and players must hit fairways consistently to win. The greens are some of the smallest on tour and don’t forget the U.S.G.A. will do their best to make them even more difficult. Heck, I can’t wait to see some of the diabolical pin placements, too. 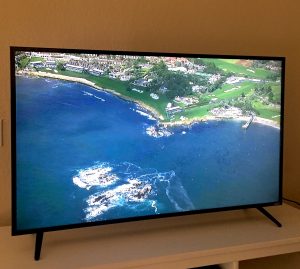 Most of all, I’m primed and ready to see that magnificent golf course illuminate from my big screen and watch to see if Koepka snares his Three Peat.