If you think some people are lousy golfers, wait till you see them drive a golf cart.

When it comes to slow play, the golf cart, uh, I mean the clueless dolt behind the wheel, is one of the main contributors to this malady.

There’s nothing worse than standing on tee box as you scan the fairway and see the twosome ahead of you driving aimlessly looking for a ball or chasing down a beer can that fell out of the cart. 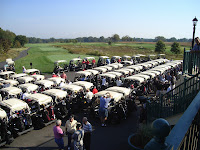 Fact is, if you think lots of people don’t know the rules of golf, rest assured, they have no idea about golf cart etiquette.

Sitting in your cart checking your cellphone for emails or putting on sunscreen while your playing partners are teeing off is rude and unsociable. You should be on the tee showing interest in others and keeping an eye out for wayward drives so you can find them quicker as a group.

Slamming on the brakes as you pull up to the next tee box, putting pedal to the metal on a downhill cart path and weaving down the fairway after a few too many brews can result in an injury to you or your passenger. Driving drunk in a golf cart is about as stupid as being blasted in your Beemer on the highway.

3. Don’t Drive While Others Are Hitting

Be courteous and don’t start driving with your rattling golf clubs during somebody’s backswing. They may be a hacker and you might not respect their game, but that doesn’t give you a license to be a jerk.  Be patient and let them hit before you hit the pedal.

4. Bring Clubs When In Doubt

There’s nothing worse than people who leave the cart on the path, walk across the fairway, hit a crappy shot out of a bunker then realize they need another club. Especially near the green, you need to bring a couple of short irons if you have any doubt about which shot you want to execute.

5. Always Park in the Direction of the Green

Parking sideways on a fairway is especially costly if somebody on the tee happens to launch a long bomb in your direction. You’re a sitting duck without protection if you’re parked sideways.

If the sign says “Cart Path Only”, guess what, that’s what you need to do. It’s all about respecting the golf course and the maintenance crew who are trying to keep it in top shape. Same goes for those cart direction signs near the green. Don’t disregard them and cozy the cart up to the green. The instant you see them, head for the cart path. Also, when the pro at the club says, “90 degree rule today”, don’t drive erratically on the fairways and act like you never heard the request.

Hey, you see that rake on the back of the cart. You need to use that to rake bunkers. It’s not a decorative amenity. More important, don’t forget the rake at the bunker because you’ll probably need it again.

8. Be Courteous to Players on Other Holes

Be aware of golfers playing on nearby holes. For instance, don’t zoom up to a green when a golfer on an adjacent tee box is hitting and you might disturb his concentration. Don’t slam on the brakes while someone nearby on another hole is about to hit.

9. Don’t Use Your Cellphone in the Cart

Be aware, the golf cart is not some soundproof room where you can blab endlessly to your wife or the poor slugs back at the office. Don’t treat the cart like your “office” on the links where you can close a deal while everybody else is teeing off.

Leaving your golf cart full of empty beer cans, Snickers bar wrappers and cigar butts floating in your half-empty cup of soda just isn’t cool. You don’t have to leave it spotless, but show some class and respect to the people in the cart barn who have to clean up your mess.

Winter Clearance - Up to 50% Off Select Products