Let’s face it, there’s not a lot of to write about golf travel right now, especially internationally.

Presently, I have a couple of topic choices, wine and made-for-TV golf matches that raise money for Covid-19 charities.

With a bit of Guru genius and ingenuity, I’ve somehow managed to combine both.

I decided to review The Match: Champions for Charity while drinking a glass of Cabernet Sauvignon.

Besides Brady’s struggles, Mickelson’s over coaching and Barkley’s great one-liners, unfortunately, the one other thing I’ll remember about the day is the freakin’ rain.

It just wouldn’t stop. My gosh, I thought the foursome was going to have to trade in those fancy, schmancy golf carts for canoes.

That said, the rain didn’t ruin the day as Tiger, Phil, Tom and Peyton delivered big time with a thoroughly enjoyable day of golf, trash talk and raising money ($20 million) for great causes. 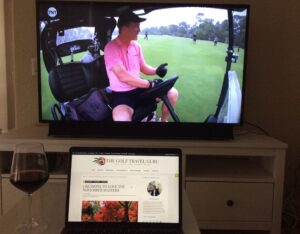 “What is the over/under for Slugger White getting bit by an animal looking for all these balls.”–Charles Barkley after Brady and Manning were having trouble hitting the fairway and their golf balls were landing in the palmetto and trees.

“I had the coffee then I activate the calves”–Phil Mickelson, as he stood over the ball on the No. 3 tee in an attempt to win the Longest Drive competition. He then proceeded to hit one in the palmettos.

“Do you want me to use one of my U.S. Open medals?,” Tiger Woods responded when Mickelson asked him to mark his golf ball. It was an epic jab by Tiger because Philly Mick has never won a U.S. Open and finished runner-up an amazing six times.

“What the hell is wrong with that?–Charles Barkley, after the lead announcer Brian Anderson stated Brady’s previous three tee shots were woods, cart path and water.

“Shut your mouth, Chuck”–Tom Brady, following Barkley’s constant chiding about his golf game and then Brady’s amazing hole out from the fairway on the 7th hole.

“The drive might be a touch long, but it might check up.”–Phil Mickelson quipped when launched a bomb drive that landed on the green on the 330-yard par 4 11th hole. 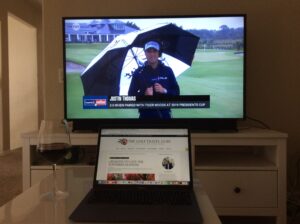 –How about all the hackers and duffers jumping on Twitter to challenge Brady to a golf match when the 6-time Super Bowl champ was struggling on the front nine. He quieted them with his hole out iron shot. Or, at least some of them.

–Justin Thomas was pretty darn good and entertaining as an on-course analyst, especially when he called Barkley a fat-ass and kept annoying Trevor Immelman with Australia golf stories.

–Every double-digit handicapper like the Guru has played with a good player like Phil who overloads you with so much information you end up befuddled and struggling. Not sure if that’s why Brady struggled so much, but Phil was more confusing than a nuclear physics college lecture.

–They should have played alternate shot all the way through. While the back nine was smooth sailing, the best-ball on the front nine was agonizingly slow.

–It wasn’t a good look for Under Armor when Brady split his pants. What a round for the G.O.A.T. He looked like every other nervous amateur at the pr0-am when he sees Tiger staring him down on the first tee.

–Even though Barkley couldn’t get a bogey on his challenge hole at the end of the telecast, believe it or not, he really looks improved from the previous times I’ve seen him play on T.V. Remember that excruciating, halting swing he used to play with? Sir Charles is back. And needless to say, he was really on his one-liner game throughout the telecast.