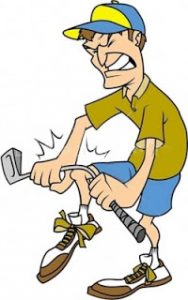 Slow play golf has been in the news a lot lately on the PGA Tour. But, a few pros incessantly pacing off putts doesn’t really bother me that much when I’m lounging on the couch, sipping a cold one on a Sunday before I doze off to a nice REM sleep.

No, what really bugs me is playing with a ridiculously slow player. Someone that doesn’t seem to mind spending hours and hours on the golf course.

Hopefully you don’t have to play with anyone of these guys in the near future:

You stand there watching patiently as this guy takes 1-2-3-4-5… practice swings before finally settling in to take the perfect swing. The magical result: A 30-yard dribbler. Just hit the freakin’ ball, will ya?

2. Lining Up Putts Like a U.S.  Open Qualifier Guy 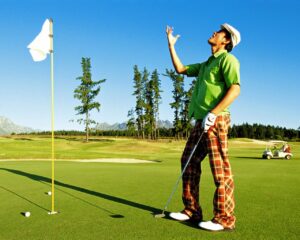 Analyzing a putt from every angle imaginable like somebody trying to qualify for the U.S. Open, this hacker, unfortunately is typically just trying to salvage a triple bogey.

Has it ever been proven that his plump bob crap even works? Regardless, if you’re an 18 handicap, just putt the damn ball so we can move on to the next hole. I don’t know whether to laugh or scream when I see someone in the group up ahead doing the plumb bob tango.

4. Working on His Game Guy

Oh boy, nothing like standing on the other side of the fairway watching slow play guy working endlessly on his takeaway and swing plane. He checks and double checks every movement of his swing till he finally pulls the trigger and hits a world class chunker. 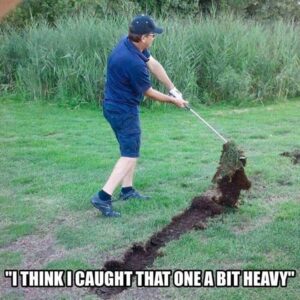 Hey, “the other guys can wait” is the philosophy of this fairway Romeo. While he’s yukking it up with the bombshell cart girl everyone has to wait. He tries the same tired lines as other fairway “playas” only to be rejected. Sadly, the players in his group have to wait until he flames out fabulously.

This fitness guru won’t walk ten yards to his ball. He must drive the cart everywhere. Oh no, he can’t take a couple of clubs and let his partner drive the cart to save time. He paid for the damn thing and he’s going to drive it every inch of the course.

This is the guy that doesn’t have a rangefinder who spends an inordinate amount of time looking at the yardage posted on the scorecard or sprinkler head, then carefully paces off his yardage. He may even throw a leaf in the air to test the wind direction. After all that, he shanks one into a fairway bunker about 15 yards away.

8. Never Give Up on Finding a Ball Guy 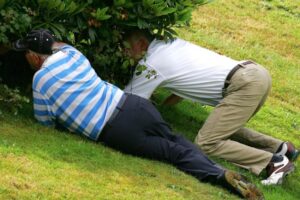 “Hey, dude, here’s a couple of bucks to buy a new ball”. That’s exactly what I want to say when some cheap ass just won’t give up searching for his ball. The guy cranks a tee shot way right about 50 yards into dense jungle forest and he still thinks he can find his ball. The next thing you know he’s traipsing through the woods like Indiana Jones searching for a golden sphere.

Can you save the long-winded stories about your high school heroics for the clubhouse grill. Nobody wants to hear about how you scored the winning touchdown and later scored with the head cheerleader.

This is the Kevin Na, Jim Furyk, Bryson DeChambeau wannabe that has never heard of “Ready Golf”. He wants to play every round like a PGA Tour event. He’s always deferring to the player furtherest from the hole or insists on the correct order of play at every tee box.