The good, bad and ugly…As the controversial choice for the 2015 U.S. Open, we’ve heard it all about this public course in Washington State.


I decided to head to the Pacific Northwest and play this course that burst into international prominence in June. 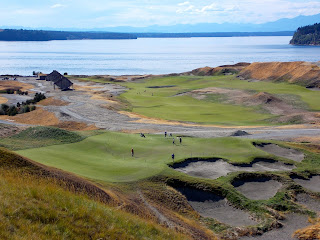 It feels more like a British Open venue than a U.S. Open site with its dunes, waste areas and mounds and slopes around the greens. When you add in unpredictable weather and winds and occasional click-clacking trains rolling by, it seems more British Isles than Washington State isles. 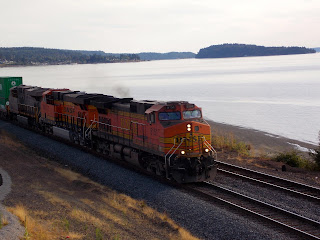 Measuring from 5,100 to 7,585 yards, the par 72 layout plays fast and firm. Every blade of grass on the course is fescue–on the tees, greens, fairways and rough.

The speedy turf allows you to hit the ball low and run it up the fairways and you can bump and run shots on most holes. For mid to high-handicappers the most difficult part of your round will be hitting wedges from 60 yards in with extremely tight lies.

While the elevations provide challenging holes and amazing views, they also can have an adverse effect on your round if you get fatigued from walking the undulating terrain. It’s almost an eight mile walk with some steep climbs and elevation changes. If you’re out of shape and used to riding around in a cart, Chambers Bay will definitely test you physically. Rented push carts and taking a caddie can help remedy that problem. 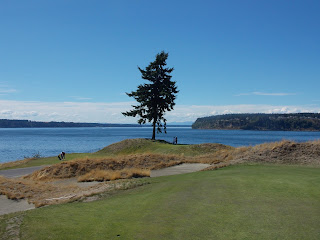 The super sized greens with exagerrated humps, hollows and backboards can easily destroy your round (with three and four putts) even if you’re having a great ball striking day.

I played Chambers Bay on a hot and sultry July day just a few weeks after the U.S. Open. The greens were, for the most part, bumpy and inconsistent on that day. I was truly surprised and disappointed. I was informed “the reasons for the questionable greens were the unseasonably warm weather combined with the stress associated with the extreme agronomic practices required to prepare for the U.S. Open. ” Their staff is working diligently to correct the problem and hopefully they’ll have the greens in top shape before you visit.

Chambers Bay is not a cheap place to play (See rates below) so I suggest calling to inquire about the greens before you book your tee time. 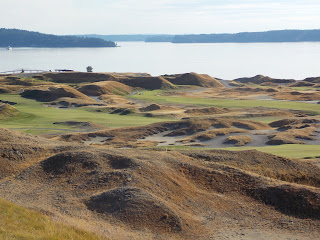 For more information about the course and tee times, click to Chambers Bay Golf or call 877-295-4657.