My best sports spectator experience, however, was the 2014 Ryder Cup matches at Gleneagles in Scotland. 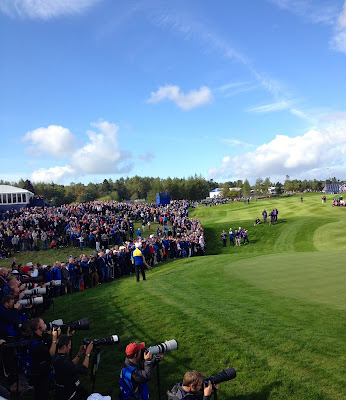 Nothing, and I mean nothing, compares to the patriotic fervor, passion and drama of the Ryder Cup matches. The raucous crowds and cheers that reverberate from one fairway to another give the event the feel of a golf tournament in a soccer stadium.

Watching the best players in the world play for their country just elevates the importance of every putt, every drive and every point won.

If you have the time, money and inclination, I strongly encourage you attend in person to adequately immerse yourself in Ryder Cup mania.

Hazeltine National Golf Club in Chaska, Minnesota, a suburb of Minneapolis, is one of America’s great championship layouts. Opened for play in 1962, this Robert Trent Jones design is a popular choice for some of golf’s biggest events. Hazeltine hosted the 1970 and 1991 U.S. Opens, 2002 PGA Championship and 2009 PGA Championship.

For playing golf, shopping, dining, nightlife and gaming, the Twin Cities has lots of options. There are more than 65 golf courses within a 20 mile radius of the metropolitan area; the Mall of America is the largest shopping and entertainment complex in the U.S. with more than 400 stores; there’s a great selection of restaurants such as Alma (New American), I Nonni (Italian) and Butcher & The Boar (American/Beer Garden) to name a few; the North Loop in the Warehouse District is brimming with nighttime activities and there are several casinos within easy driving distance.

Most likely, phenom Jordan Spieth will lead the U.S.A. team against a European team led by Rory McIlroy. The 2016 teams (based on current standings) look like they’ll be young, dynamic and exciting. As of March 14, 2016, Jordan Spieth, Bubba Watson, Dustin Johnson and Rickie Fowler top the U.S.A. standings. On the European side, Rory McIlroy, Danny Willett, Andy Sullivan and Matthew Fitzpatrick lead the way.

Two of golf’s most respected elder statesmen, Davis Love III and Darren Clarke are the captains of the 2016 Ryder Cup teams. Low-key, but fiercely competitive Love has Ryder Cup captain experience at the 2012 matches at Medinah C.C. The popular and affable Clarke served as vice captain in the European wins in 2010 and 2012.

If you want to attend, I recommend Premier Golf, a highly respected golf travel company based in Atlanta, Georgia. They’ve been licensed since 1991 by the PGA of America as the exclusive distributor of official Ryder Cup packages. Their travel specialists have planned and executed a wide variety of Ryder Cup trips for hundreds of clients and they have more experience than anybody in coordinating attendance to this event.

You can choose from a list of packages that includes the Ultimate Ryder Cup Experience with accommodations at the JW Marriott starting at $6,995 per person, double occupancy to the economical Blue Tee Package at the Commons Hotel starting at $2,895 per person, double occupancy.  Other packages include Championship Tee (Hyatt Regency Minneapolis); Resort Package (Mystic Lake Casino Hotel); Gold Tee (Radisson Hotel Bloomington By Mall of America); Gold Tee (Renaissance Minneapolis Hotel, The Depot); Blue Tee (Best Western Plus Bloomington) and Blue Tee (Residence Inn at The Depot).

Some of the optional add-ons include VIP Hospitality upgrade, International Pavilion upgrade (Thurs.-Sunday), additional nights accommodations (ask for quote) and practice round tickets.

I suspect these packages are moving pretty fast. Click to PREMIER GOLF for information or call one of their travel specialists at 866-260-4409.