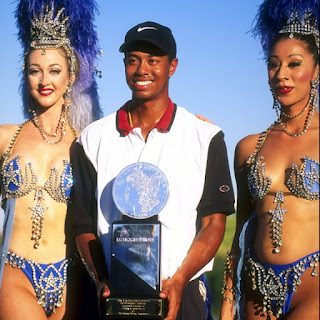 Has the Tigermania train finally pulled into the station?

While most of the media (including me) are still enamored with the power of Tiger, my guess is more and more fans are tiring of all things Tiger.

Let’s face it, Woods still moves the needle for television viewers and if you put his name in a headline, you’re sure to get lots of clicks on the Web.

You clicked on this column, didn’t you?

That said, as a fan I’m weary of seeing Woods as the main storyline before every tournament he’s scheduled to play.

The same old scene is getting real tired and played.

Here’s how it goes:

Tiger does his obligatory pre-tournament press conference (with the exception, of course, of a couple of weeks ago when he did that silly Internet Q and A with lame, softball questions by fans).

Anyway, the main question is always the same: Tiger, you’ve been working with Sean Foley for quite some time now, how is your game progressing?

Other than that victory earlier this year at Bay Hill, all we get from Tiger is a bunch of excuses about the putts not falling, reverting back to his old swing, blah, blah, blah…

Tiger, why not tell the truth?

Your brain is still scrambled from the Escalade escapade, the ensuing divorce and the huge amounts of energy and angst it took to fight off TMZ, The National Enquirer and other tabloid journalism outlets. Moreover, you still have doubts that come with any swing change and these young bucks are harder than heck to beat.

Even if Tiger returns to form, the twenty somethings like Rory McIlroy, Rickie Fowler and Webb Simpson and others like Bubba Watson and Hunter Mahan are much more difficult to beat than the opponents he faced during his fabulous run to 14 majors.

The current crop of young contenders aren’t shooting 74 in final rounds like Sergio Garcia and Ernie Els to make your victories easier and Phil Mickelson is not the easy mark in majors like he was earlier in his career.

We saw the future of how fascinating and exciting the PGA Tour can be without Woods, who missed the cut, with the playoff between Rory and Rickie (D.A. Points, too) at Quail Hollow. These are two immensely dynamic players who could give us years of great golf.  They’re full of energy and flair, especially Fowler with those fluorescent golf shirts, Ringo Starr haircut and wispy, jazz musician mustache. C’mon Rickie, bring out the beret, please.

I want to see more of Rory and Rickie and less of Tiger.

There will never be anything like Tigermania in golf again. It was great to witness Tiger in his prime and winning majors by double digit stroke margins.

Those days are just distant memories now. It’s sad, but every train eventually pulls into the station.