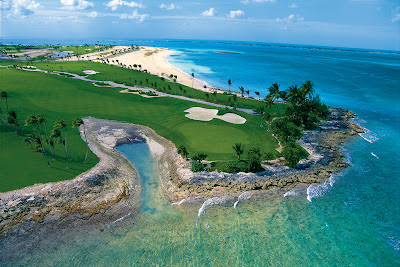 I like Golf Channel’s current series of “The Big Break-Atlantis.”

You recruit a bunch of attractive young ladies, who can play golf better than 99 percent of the viewers, and put them at a phenomenal resort destination like Atlantis, Paradise Island in the Bahamas.

The producers of the show are very shrewd by giving us less golf and more social interaction between the participants such as whispered criticisms, back stabbing and disbelieving looks that make all those Housewives of New Jersey, Orange County and Atlanta shows so popular.

In fact, the opening scene of The Big Break-Atlantis starts out on the beach, not the golf course. One by one the girls are strolling down the sands in shorts and halter tops till they see a sign that suggests they proceed up to a nearby green for a putting challenge. Each participant receives a set number of points for sinking either a one, three or five foot putt. To add suspense, the girls must find the bottom of the cup in their sandy bare feet with a strong wind blowing through their hair.

Those wily producers know this is what makes good television. Endless shots of young ladies hitting nine-irons into greens will not keep viewers tuning in every week.

Beautiful ladies strolling on the beach with a backdrop of emerald green waters and sandy beaches is a can’t miss, especially with all of The Golf Channel’s middle-aged male viewers, which is my demographic.

If you’re not familiar with “The Big Break” concept it’s a competition between aspiring pros for a shot at playing in an LPGA event and winning a bunch of great prizes. In addition to the tournament exemption, the prizes include an endorsement contract from Adams Golf, which includes an additional $10,000 in cash, a $10,000 shopping spree from Dick’s Sporting Goods, a $10,000 car-rental credit from Avis Car Rental, full exempt status and all entry fees waived for a Symetra Tour season (a developmental professional tour) and an all-expense paid return trip for two to Atlantis.

There are twelve competitors ranging in age from 19 to 31.  All of the participants have skills honed in junior tournaments and later on college teams. These girls have game, but, for whatever reason they’ve not gotten, er, the big break to make it on the LPGA. Participating in the show certainly can’t hurt. LPGA players Ryann O’Toole and Kristy McPherson were previous competitors in The Big Break.

The Big Break show concept pits golfers against each other in a variety of challenges that test their physical skills and mental acumen. I’ve watched the show numerous times and I never pay close enough attention to the scoring system, but who cares. It’s just great television if you like reality shows.

One contestant is eliminated each week during the 11-part series, with the last player standing awarded the winner. Nineteen year old Megan Hardin of Lake Arrowhead, California was eliminated after the first show.

The contestants aren’t the only phenomenally photogenic stars.

Other producers must like the good looking Ocean Club course, too. Among the high-profile tournaments staged at this lush oceanside golf paradise are the Michael Jordan Celebrity Invitational and the Michael Douglas and Friends Golf Tournament.

Who’s my pick to win?

My choice is Zakiya Randall, a sassy and confident 20-year old from Atlanta, Georgia. She seems to have the mental fortitude that’s typically needed to win these reality show competitions.

Tune into “The Big Break-Atlantis”.

You can’t beat the scenery.