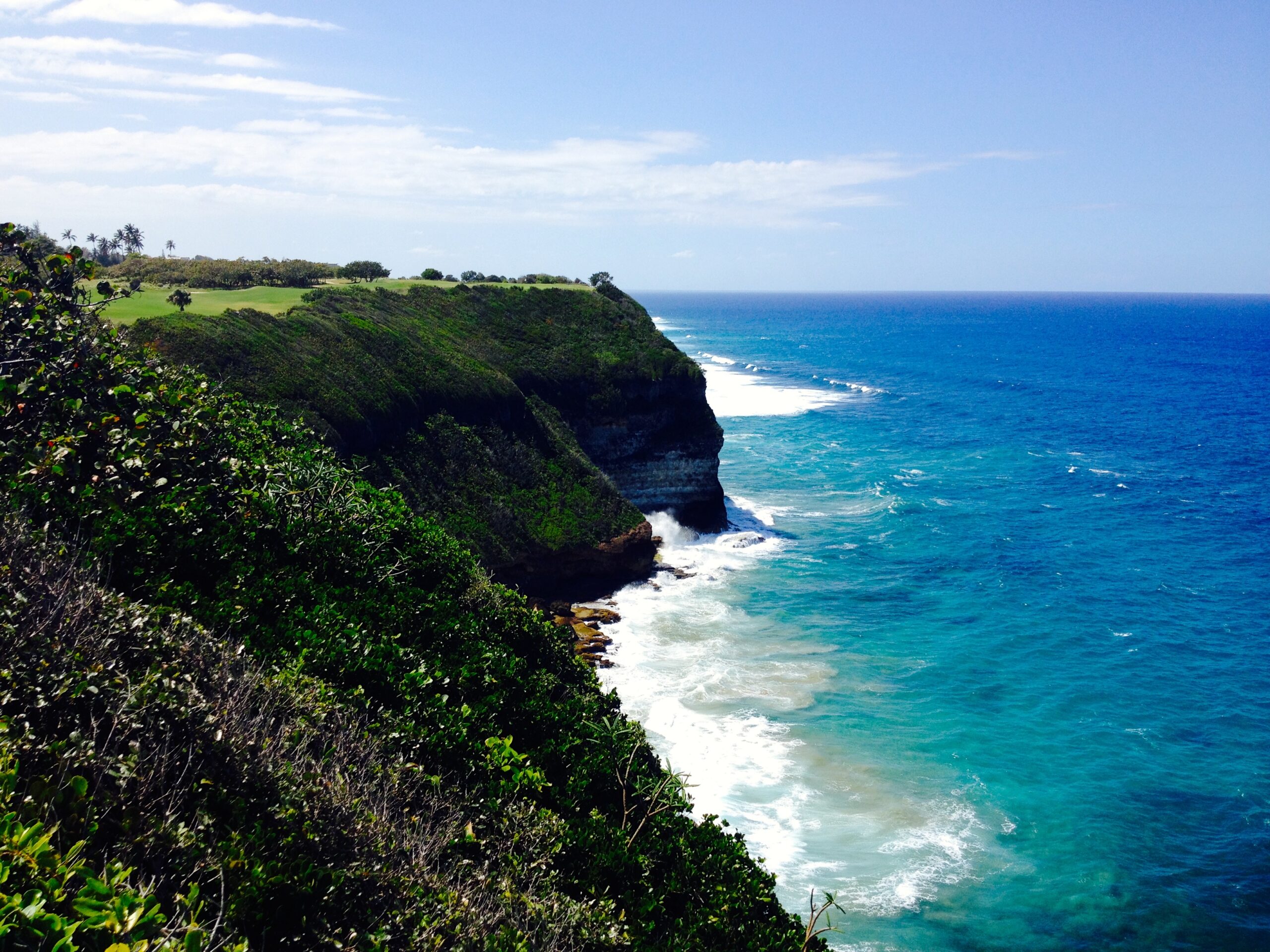 Who knows when international travel will return to any sense of normalcy. Late Spring? This Summer? In the Fall?

If you’re itching to bust out of the continental U.S. like me, Puerto Rico is a great option for those who want to experience a different culture without a lot of hassle.

Seriously, like everybody else I’m tapped out on local cultural experiences like Uber Eats from Chipotle, Chili’s and Taco Bell.

I have a good friend in the travel industry who visited P.R. a couple of weeks ago and he raved about the experience on and off the course as well as the safety protocols.

I’ve visited Puerto Rico several times and it never fails to disappoint with its big name designer golf courses, beaches, casinos, cuisine and, oh, did I mention the rum.

You won’t find a better place to wash a couple of golf balls in the ocean, sip some awesome rum and win a few coins at the tables. 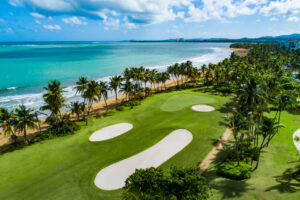 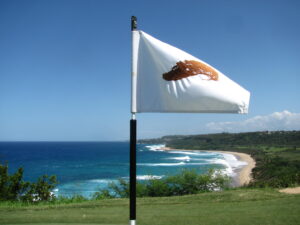 Designers like Greg Norman, Tom Fazio, Robert Trent Jones, Jr, Rees Jones and Gary Player have taken full advantage of Puerto Rico’s magnificent terrain. There are 18 public-access courses throughout the Island with a plethora of settings ranging from oceanfront to some with mountain and rainforest panoramas. Some of my favorite courses  I’ve played are Royal Isabela, which is an oceanside golf experience I put on the level of Pebble Beach and Teeth of the Dog; St. Regis Bahia Beach, a lush layout with beautiful views of the El Yunque rainforest and the two courses at Wyndham Rio Mar Golf and Beach Resort, where you’ll see iguanas sunning themselves along the fairways.

2. Easy To Get There

Like all travelers I cherish direct flights like a frosty brew after a birdie on 18. Airlines like American Airlines, Delta, United, Southwest, Jet Blue and Spirit Airlines have direct flights to the island from cities like Boston, Chicago, New York, Washington D.C., Philadelphia, Orlando, Hartford, Dallas, Houston and Baltimore.

3. No Passports and Even More Perks

With it’s magnificent beaches and Caribbean paced tropical lifestyle, you tend to forget Puerto Rico is a territory of the good ol’ U.S. of A. Travelers from the U.S. don’t need a passport, Puerto Rico’s currency is the U.S. dollar and the official languages are English and Spanish. Better still, U.S. travelers don’t require international calling plans for their phones. In Puerto Rico, there is a 4GLTE network with 5G available at some locations.

Puerto Rican travel officials have done an admirable job of making it easy and safe to visit the island. All arriving passengers must complete an online Travel Declaration Form from the Puerto Rico Health Department, show a negative molecular COVID-19 test result taken no more than 72 hours prior, and obtain an Airport Exit Confirmation QR Code, which travelers will automatically receive when uploading their PCR molecular test results to the Puerto Rico Health Department’s online portal. Arriving travelers can access the Travel Declaration Form at www.travelsafe.pr.gov or www.viajaseguro.pr.gov. (As a U.S. territory, Puerto Rico is excluded from the CDC requirement to provide proof of a negative COVID-19 test to return to the mainland United States. Check your local requirements.)

Pack a couple of extra bathing suits because you’ll be spending lots of time on the sandy shores if you love watersports. With 270 miles of coastline and nearly 300 beaches, there’s no shortage of places to enjoy everything from surfing in Rincon to snorkeling the numerous caves, reefs and mangrove coves around the island. In San Juan, one of my favorite snorkeling spots is Escambron Beach, which is protected by coral reefs.

I’ve been lucky to travel extensively around the world and I can honestly say Puerto Ricans are some of the most welcoming people I’ve met along the way. Their resilience and positive attitude is why they’ve bounced back so successfully from hurricanes and other bad events. It doesn’t get any better than someone with a bright smile handing you a pina colada and telling you to enjoy your day. 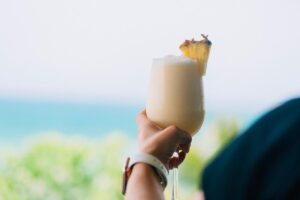 Uh, when the national drink in Puerto Rico is the Pina Colada, ya gotta believe you’ll be on your top poolside game. Word is the Pina Colada was invented in 1954 by a bartender at the Caribe Hilton in San Juan. Puerto Rican rum is epic stuff, too, and I’ve imbibed enough to be just shy of some sort of expert. Everybody worth their blender or cocktail glass has heard of Bacardi and Don Q. If you want a step up, try Ron del Barrilito, often called the “Cognac of the Caribbean”. Ah, so smooth! Puerto Rican food is vastly underrated. It’s a wonderful mixture of Spanish, Taino, African and American influences. Some of my favorite dishes are Lechon asada, a spit-roasted suckling pig; Tripleta, a grilled sandwich filled with chicken, ham and beef and Mofongo, a wondrous mixture of mashed fried plantains and garlic.

One of my favorite things to do away from the golf courses in Puerto Rico is to explore the El Yunque, the only rainforest that is part of the U.S. National Forest System. Filled with amazing trees, unique birds and 25 waterfalls, this phenomenal setting is only a one hour drive from San Juan or if you’re staying at the Wyndham Grande Rio Mar Golf & Beach Resort it’s literally across the street. You can experience El Yunque in a variety of ways including horseback, ziplining, ATV tours, eco tours and hiking. Other don’t miss activities are roaming the cobblestone streets of Old San Juan and exploring Castillo San Felipe del Morro, a massive fortress built by the Spaniards in the 16th century. Don’t forget rum tastings and night kayaking in the bioluminescent bays, either. 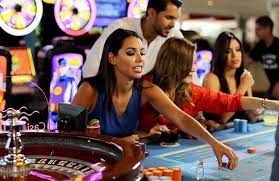 The only thing better than winning on the golf course is scoring big at the casinos, right? If you want to throw some bones, pull the one arm bandits or play blackjack and poker, Puerto Rico can accommodate you with 16 casinos. San Juan has large scale casinos like Sheraton Puerto Rico Hotel & Casino, El San Juan Hotel and Casino, San Juan Marriott & Stellaris Casino, Casino del Mar at La Concha Resort and Ritz Carlton San Juan Hotel. In addition, there are three casinos in the southern city of Ponce.

With temps ranging between 70 and 80 degrees Fahrenheit throughout the year, Puerto Rico is a golfer’s paradise 365 days a year. If you like crisp mornings, head to the central mountainous area during December and January where the temperatures go down to about 60 degrees.