Tiger Woods is undoubtedly the most amazing comeback story in the sports world.

My nominee for the “most amazing comeback for a tourist destination after a hurricane” is Puerto Rico.

A little over two years ago, Hurricane Maria, a vicious Category 5 storm, slammed into the island with force and fury. I remember seeing the images on the news of the massive destruction and felt sad because I love the island and I surmised it would be a long and arduous recovery.

Thankfully, I was wrong. Turns out, it hasn’t taken nearly as long as I thought and many others predicted.

Get this, according to Discover Puerto Rico, a Destination Marketing Organization (DMO), occupancy spending has reached the highest in the past eight years, an amazing double-digit increase compared to 2017 pre-Hurricane Maria levels.

Puerto Rico golf courses and resorts are reporting substantial growth in rounds and revenue during 2019 compared to the first nine months of 2018. 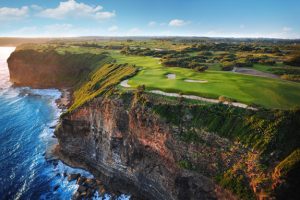 “The main reason for this tremendous comeback is the resilience of the Puerto Rican people,” says Ed Carey, chief sales officer for Discover Puerto Rico. “They’ve worked diligently on reconstruction and enhancements to keep up with our marketing campaigns to get the word out that Puerto Rico has bounced back and welcomes visitors.”

The golf courses in Puerto Rico are better than ever. A high priority was placed on clean-up and enhancements after the hurricane and the resorts and golf courses responded quickly and efficiently.

There are 17 public-access courses throughout the island with a variety of settings ranging from oceanfront to some with mountain and rainforest panoramas. 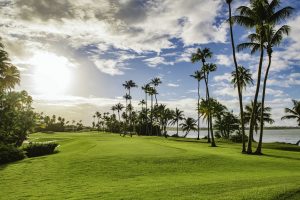 I’ve visited Puerto Rico several times and some of my favorite courses are Royal Isabela, one of the most scenic courses I’ve played around the world; St. Regis Bahia Beach, a lush layout with beautiful views of the El Yunque rainforest and the two courses at Wyndham Rio Mar Golf and Beach Resort, where you’ll see iguanas sunning themselves along the fairways.

For those who want to incorporate playing golf with seeing the pros, The Resort at Coco Beach, a Hyatt affiliated hotel, hosts the PGA TOUR’s Puerto Rico Open played in February on the Championship Course, a challenging and drop dead gorgeous course with both mountain and ocean views. 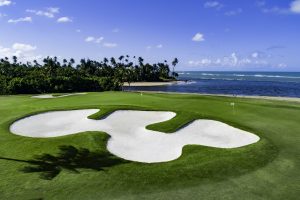 High-season starts after Thanksgiving and you’ll find lots of great deals during late summer and fall.

“The meeting and conventions segment has rebounded amazingly,” Carey says. “Our bookings for 2020 are on a record setting pace.”

The Puerto Rico Convention Center (PRCC) announced fiscal year 2018-2019 as the most successful year in its 14-year history. PRCC, the primary anchor of the Convention District in San Juan, will expand with opening of the El Distrito San Juan Complex.

Set to open early 2020, El Distrito will elevate the Puerto Rico meeting and convention experience to another level. The 5-acre hospitality and entertainment district will encompass a 6,000-attendee state-of-the-art performance venue and a pedestrian mall with retail, dining and nightlife options, including a rum micro-distillery.

The outdoor plaza will feature one of the world’s largest LED screens, which can be used by groups for special branding purposes, according to Carey. Other interesting elements at El Distrito are a zip line experience, a sports bar/micro-brewery and 175-room Aloft Hotel.

“El Distrito will be vibrant and exciting just like a mini Times Square,” Carey says. “There will be something for everyone.”

One of things I absolutely love about Puerto Rico is the hassle-free aspect of traveling to and staying there. American citizens don’t need a passport to enter, the U.S. dollar is its currency and you don’t have a language barrier as the island is bilingual.

Getting there is easy, too. There are numerous non-stop flights from major cities in North America, particularly along the Eastern Seaboard.

There are a myriad of off-the-course experiences ranging from enjoying its sandy beaches to  shopping and dining in Old San Juan and touring El Yunque Rainforest. Click to Discover Puerto Rico for a full list of options.

I love the food and drink in Puerto Rico. You’ll find everything from amazing street food vendors to elegant meals at five-star restaurants. In case you don’t know, it’s the birthplace of the Pina Colada and you can also tour the island’s Bacardi Rum factory. 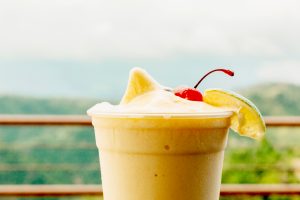 Believe me, a chilled Pina Colada or shot of smooth Puerto Rican rum after a round of golf will help you forget about all your shanks and banana balls. I speak from experience.