I can’t believe they named a beer after my golf game.

The G.T. Guru is oddly proficient at making birdie and immediately following it with a triple…

I’ve sipped and guzzled beer around the world on and off the course in places like Germany, Ireland and Scotland and more exotic locales like China, Tunisia, Croatia, Argentina and Mallorca so I consider myself somewhat of a connoisseur of international beers but certainly not an expert.

And, I like Triple Bogey Beer, an American-style blond lager brewed in London, Ontario, Canada.

I recently sampled the brew after a round of golf and while it didn’t help erase any triples or snowmen from my scorecard, it put a smile on my face. A couple of weeks ago, the co-owner/president, Geoff Tait, sent me a couple of cans and told me to give it a test drive.

–It’s very light, not bitter and has no after taste.

–It has an inviting mild aroma of light malt and herbal/citrusy hops.

— Unlike some heavy IPAs, you can knock down a few TBs or wash down a burger or wings and not feel bloated.

— I enjoy a lighter beer after golf so it’s ideal for post round celebrations or to drown your sorrows.

Currently, golfers and beer lovers can find Triple Bogey in Canada in Ontario, Manitoba, Saskatchewan, Alberta and British Columbia in a few weeks, according to Tait.

“We have a trademark and have sold some in Ohio,” he says. “We want to go heavily into the U.S. and beyond.”

Tait suggests golf courses in the U.S. to ask their local distributors to carry Triple Bogey. 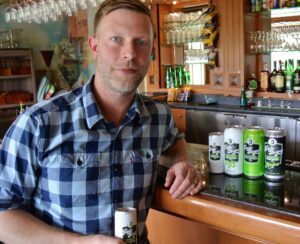 “We want to see our beer on tap at Bay Hill in honor of our friend, Mr. Palmer,” he recently told G&E Magazine.

Scratch golfers to dubious duffers will like Triple Bogey, no matter where you tee up. The company recently  debuted Triple Bogey Light, which has half the calories of the original, and Triple Bogey Amber, a full bodied, dark beer. In addition, their product line includes a seasonal brew, Hurry Hard, and a canned white wine. 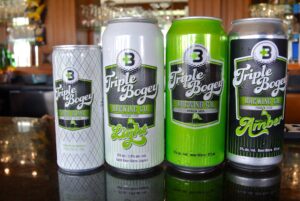 Tait and his wife started Triple Bogey in 2014 and the golf loving entrepreneur brings a unique background to the beer business.

He’s been around golf his entire life starting as range picker and caddie at age 12.

Fast forward, Tait once owned Quagmire, a golf clothing company he started in 2005, which featured cutting edge, youthful looks that had a licensing deal with Arnold Palmer. In North America, the clothing was called “Arnie.” Quagmire closed its doors in 2012.

A master brand builder, Tait once owned a surfing company while attending college in Australia.

Plus their motto is my motto on and off the course: “Better hit another.”