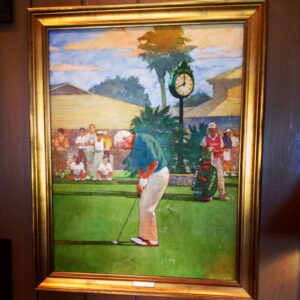 2. Arnie’s Barn at Top of the Rock in Branson, Mo. 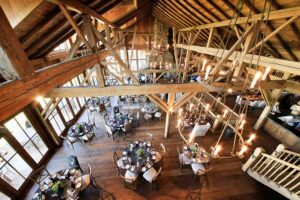 Overlooking the Top of the Rock golf course, this one-of-a-kind restaurant was named in honor of Palmer. The 150-year old barn was transported, plank by plank, from Latrobe, Pennsylvania, Palmer’s hometown and reassembled by local Amish craftsmen at Top of the Rock/Big Cedar Lodge. The walls are dotted with golf memorabilia and the menu features contemporary Tex-Mex cuisine and Texas BBQ. I had the Mahi Mahi Tacos with cabbage slaw, lime crema and Borracho Beans. (Best fish tacos I’ve ever had.) 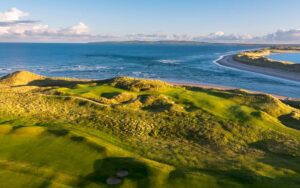 Designed by Arnold Palmer and opened in 1984, Tralee in County Kerry on Ireland’s southwest coast is a magnificent links golf experience. Nobody should leave Tralee without taking a picture with the 8-foot tall statue of Palmer with its Atlantic Ocean backdrop. Playing Tralee is one of the world’s most inspirational rounds of golf with several elevated holes hugging the coastline on the front nine affording spectacular panoramas across Tralee Bay to the Atlantic Ocean beyond. The back nine plays through gargantuan dunes with carries over ravines to plateau greens where Arnie the designer invites you to “go for broke.” 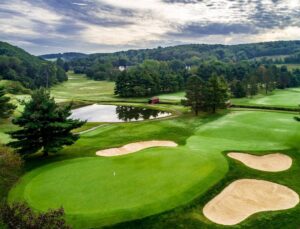 Arnie’s hometown, a village of 8,000 just outside of Pittsburgh,  is dotted with with places to remember “The King”. If you fly in, you’ll land at Arnold Palmer Regional Airport. For those driving, on Route 30 you’ll see two classic Arnold Palmer umbrellas before entering and leaving Latrobe. If you stay and play, the Springhill Suites by Marriott Pittsburg-Latrobe, the lobby is brimming with Palmer displays and memorabilia. Play golf at Arnold Palmer’s Latrobe Country Club, where Palmer learned the game. His father, Deacon, helped design and build the course. The Greater Latrobe Laurel Valley Chamber of Commerce has a display case dedicated to A.P. and you can purchase pins, bracelets and memorabilia there. Also, don’t miss the Winnie Palmer Nature Preserve at Saint Vincent College.

Palmer was one of 13 members in the inaugural class in 1974. Located in the World Golf Village near St. Augustine, Florida, the World Golf Hall of Fame pays homage to Palmer in a variety of ways, including videos and a recreated locker with some of Arnie’s notable possessions, including his golf bag with his famous umbrella logo. Palmer also partnered with Jack Nicklaus to design The King & The Bear golf course at World Golf Village, a 7,279-yard, par 72 layout.

Set just yards from the Old Course in St Andrews, Scotland, this marvelous, recently enhanced museum has a wonderful exhibit honoring Palmer. In addition, there are six interactive zones and a slew of artifacts and memorabilia celebrating the history of golf dating back more than 400 years. 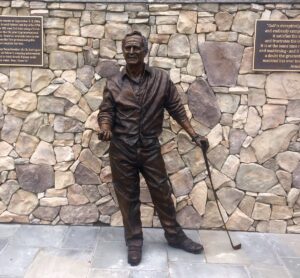 A 6-foot custom bronze statue of Arnold Palmer is displayed at this private golf club just outside Washington D.C. The statue features Palmer holding two golf balls, which commemorate his two hole-in-shots on consecutive days at TPC Potomoc. The memorial is open to the public for viewing. 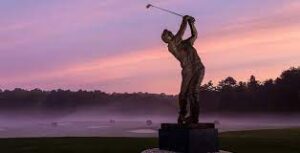 A 9-foot, 1,392 lb. statue of Arnie in full swing sits in front of the Wake Forest Golf Complex (The Badd0ck House). Palmer arrived on campus in 1947 and won the NCAA’s individual championship in 1949. When his friend and fellow Wake Forest golfer Marvin “Buddy” Worsham died in a car accident in 1950, Palmer left college for three years to serve in the U.S. Coast Guard. He returned in 1953 and in the spring of 1954, he became the Atlantic Coast Conference’s first individual champion. 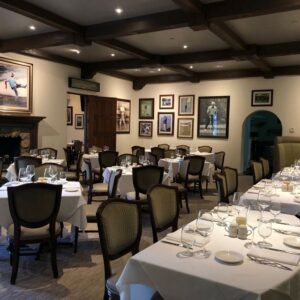 Their motto is a simple one: “At Arnold Palmer’s Restaurant we give you a taste of the good life, some of the simple pleasures in life that Arnold embraced. From the excellence in our presentation of cuisine in the approved Arnold Palmer fashion, to the hospitality shown to each and every guest.” Tastefully designed with rich dark wood furnishings and vintage framed photos of Arnie in his prime, the dining room oozes with Palmer’s classy simplicity. Some dinner menu highlights include Pan Roasted Scottish Salmon, Double Cut Kurobuta Pork Chop and Prime New York Strip Steak. The restaurant is located in Palm Springs, California.