I know, I know, it’s too early to start thinking about the Ryder Cup, right? 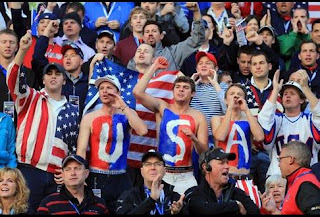 It’s just a year away and if you want to be there, you better start planning now or you might end up spending the night in a pup tent with a flashlight on the beach instead of an amenity-laden room with European linens and designer toiletries.

Afterall, some major hotels are already declaring themselves full for the 2014 Ryder Cup.

To assist in your research and planning process, here’s the scoop: 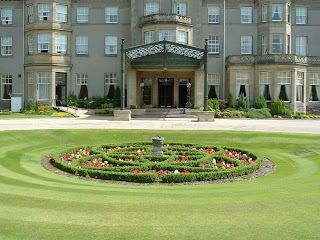 Gleneagles is a stately upscale hotel set in an 850-acre resort complex amid beautiful countryside in Perthshire, Scotland near the village of Auchterarder. Opened in 1924, the main hotel building was designed in the style of a French chateau. Today, the hotel has 232 guestrooms and 26 suites.

Through the 1920s and 1930s the hotel became the venue for those in high society and for wealthy Americans. Gleneagles closed during World War II and reopened in 1947.

It’s a beloved respite for sportsman who can participate in pursuits like shooting, fishing, falconry, equestrian and off-road driving at the resort.

Golf at Gleneagles encompasses three 18-hole championship courses–The King’s and Queen’s by James Braid, a five-time winner of The Open Championship and the PGA Centenary, a Jack Nicklaus design.

Opened in 1993, the PGA Centenary Course takes full advantage of the stunning Perthshire countryside. Nicklaus masterfully routed the course to make every hole visually appealing and challenging. Like other great Nicklaus’ courses, the Golden Bear uses his signature features such as huge undulating greens, bold in-your-face bunkering and several high risk/high reward holes to create drama and anxiety for players.

There are no breather holes on this layout, which is the longest inland golf course in Scotland. Only two holes incorporate water. Nicklaus demands pinpoint accurate approach shots on the PGA Centenary. I played there five years ago and I can attest you don’t want to come up short on approach shots or your score will soar. Mr. Nicklaus did a creative job of placing a lot of trouble in front of the greens. For those who consistently under club, you’re in for a long day.

1. Use a golf travel company that can package accommodations, tickets, transportation and golf as well as give advice on sightseeing, shopping and dining. I highly recommend Atlanta, Georgia-based Premier Golf, which is licensed by the PGA of America as the official distributor of Ryder Cup Travel packages in North America.  Premier Golf’s special Ryder Cup 2014 page
has a comprehensive list of packages at differing price points and hotels.
Among the hotels featured are The Balmoral Edinburgh, Sheraton Grand Hotel & Spa Edinburgh, Fairmont St. Andrews, Dalmahoy, A Marriott Hotel and Country Club, Radisson Blu in Edinburgh, Doubletree by Hilton Hotel in Dundee, Malmaison Dundee and Carlton Hotel Edinburgh.

2. Arrange your own trip if you’re Internet savvy and have lots of patience. I suggest clicking the Visit Scotland site, which is loaded with information about things to do, hotels and resorts and dining. For those who want to use St Andrews as a sort of convenient base camp (it’s about a 70-minute drive from Gleneagles), the Visit St Andrews site is also an excellent user-friendly site. There are a wide variety of accommodations such as boutique hotels, mom and pop B & B’s and chain hotels in major cities.

3. Rent a home in places like Stirling, Perth and Edinburgh, which all offer easy access to Gleneagles. To research, Glengolf2014, which helps in the private home renting process, is a good place to start.

Directions and Nearby Sights


Edinburgh and Glasgow airports are less than 50 miles away from Gleneagles. Great North Eastern Railway services stop at Gleneagles, which is on the London to Inverness line.

Here are the distances from Gleneagles to other major courses:

Must see sights near Gleneagles: 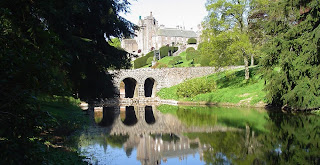 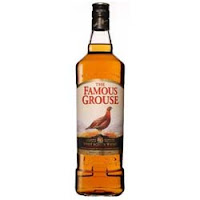 The Town of Auchterarder 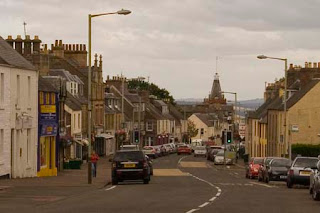 Gleneagles is located just outside the village of Aucherarder. Home to 4,000 residents, it’s laid out with a long main street (1.5 mile High Street) giving it the nickname of the Lang Toon (meaning long town). For some excellent fish and chips and fried chicken takeaway, try the Top Shop on High Street.

Why You Should Go

The politically correct answer is because you want to see one of the world’s great sports events in person where you can witness passionate players and fans in a dynamic, pulsating spectator environment. Not so politically correct is those darn Euros came back on us in Chicago and it’s about time we won the cup back on “their soil”.

Scotland is a fascinating place to play golf. Better still, if you can play on some great courses while you’re there attending the Ryder Cup to cheer on the Americans (or Europeans, if you so desire), well, as they say, “it doesn’t get any better than that” for a golf traveler.