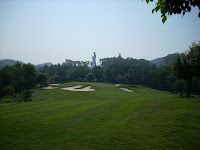 With all the recent talk about the Olympic Games including golf in 2016, many golfers have forgotten we already have a worldwide competition. It’s called the World Cup. Several years ago I saw some matches when the World Cup was held at Lake Nona Golf Club in Orlando and it was a great event with lots of pomp and circumstance. If you’ll remember, Fred Couples and Davis Love III used to dominate the World Cup in the 1990s.

“I remember one of my goals in 1976 was to be the youngest, I believe, and the quickest player to make the Australian World Cup team,” says Norman . “I turned professional in October of 1976 and won a tournament that month and the World Cup team was chosen in November to go to Palm Springs in the United States . It was a goal of mine right from the get-go to represent my country.”

He continues: “No matter where you go and play as an individual in a tournament you do represent your country. But to actually carry your flag for your country with a partner in the World Cup is an extremely high prize in my mind.”

The Omega Mission Hills World Cup will be played for the third straight year on the club’s  Olazabal Course, November 26-29. Sergio Garcia, Rory McIlroy and Y.E. Yang are among the players scheduled to participate in the event’s 55th edition. Featuring 28 two-man teams from nations around the globe, the World Cup is golf’s closest approximation to the Olympic Games.

Last year, the Swedish team of Henrik Stenson and Robert Karlsson shot a sterling 63 in Sunday’s alternate shot format to claim a three-stroke victory over Spain .