Ryder Cup 2021 is on American soil and that means a home field advantage for the Red, White and Blue, baby.

According to Sports Betting Dime, the odds are favoring team USA at -190 to take the victory this year.

While Europe has won seven of the nine Ryder Cups since 2002, the combination of an exceptionally strong USA team loaded with young, long-hitting studs and a course set up at Whistling Straits that plays to their strengths gives them the edge. 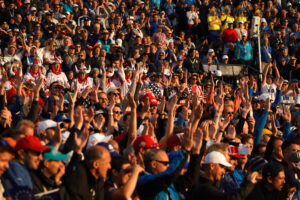 Other Reasons the USA is Favored

— It’s expected there will be fewer European fans because of travel hurdles thus creating the ultimate home field advantage for the USA team with ultra-supportive American fans.

— The USA team is much more familiar with the Whistling Straits golf course. The PGA Championship was played there in 2004, 2010 and 2015. Dustin Johnson, Brooks Koepka, Jordan Spieth and Tony Finau all finished in the top 10 in the 2015 PGA Championship on The Straits.

— The USA team has six rookies and playing on home soil will let them ease into the experience rather than being blasted by vociferous fans in Europe on the first tee on day one. Rookies have historically delivered for the USA, too. The 2008 team captained by Paul Azinger won at Valhalla in Louisville. Better still, from 2008 to present, U.S. rookies are a combined 40-29-17.

— Captain Steve Stricker is a Wisconsin native and he’s poured his heart and soul into winning the cup on Wisconsin soil.

The 7,390-yard, par-71 Straits Course at Whistling Straits in Kohler, Wisconsin is routed along two miles of stunning Lake Michigan coastline with 8 holes that play along the coast.

Dominated by bluffs and giant sand dunes, the layout has fescue fairways, more than 500 bunkers and 14 water hazards. A links-style course, it requires a wide variety of shots. When the wind blows hard, a creative ground game is needed to score well.

A few subtle and not-so-subtle changes to the course will favor the Americans. The fairways have been widened on the par-4, 446-yard 9th and par-4, 519-yard 11th. Around the greens of Nos. 2, 5 and 9 the rough has been grown instead of tightly mown areas.

The rather obvious reasons for the changes is so the bombs-way Americans will have bigger landing areas and the additional rough will neutralize the Europeans favorite shot, the bump and run around the greens.

It’s not really a big deal because the Europeans did their share of alterations in 2018 at Le Golf National in France where they created a more exacting, target-golf layout favoring their shorter hitting players.

The match could hinge on how well the teams play the difficult lakeside par 3s (Nos. 3, 7, 12, 17). If the winds are whipping fiercely off Lake Michigan, these holes will be fabulous for spectators and almost diabolical for the players.

Winner of the Claret Jug at the Open Championship, Morikawa had a phenomenal 2021 season. No. 3 in world rankings, he’s a feirce competitor who never seems to be intimidated by the moment or other more accomplished older players. He’s a terrific ball striker ranking No. 1 in strokes gained approaching the green and 5th in greens in regulation percentage, according to PGA Tour stats.

D.J., No. 2 in world rankings, has a colorful history, to say the least, at Whistling Straits (grounding his club in a bunker in the 2010 PGA Championship) and leading the 2015 PGA Championship at the Straits after a first round 66 only to falter and finish T7. Johnson’s prodigious length off the tee (averaged 313 yards in 2021) is one of the reasons he performs so well at Whistling Straits.

The Mad Scientist finished the season first in driving distance average at a whopping 323.7 yards per launch. He was also first in eagles and strokes gained off the tee. Not sure we’ll see him and Brooksie teeing it up together, though.

Brooksie injured his wrist at the Tour Championship and everything is hush hush about his full recovery before the Ryder Cup. Who will replace him if he can’t go? Well, Patrick Reed aka Captain America is tanned, rested and ready.

J.T. went 4-1 in his first Ryder Cup in 2018 at Le Golf National in France. Thomas, no. 6 in world golf ranking, loves playing international competitions and should be a stalwart for the team. Winner of The PLAYERS Championship, Thomas performs well on tough golf courses. Even though he’s only 5′ 10″, 160 lbs. he launches it 303.9 yards average off the tee. He’s also 3rd in strokes gained approaching the green, according to PGA Tour stats.

The only player to win four times on the PGA Tour in 2021, Cantlay, the FedEx Cup champion, is on a freakin’ roll. His putting in the last month or so is off the charts. Time after time at the Tour Championship he’d roll in 20 footers like they were tap ins. If he can keep up his putting momentum, he’s gonna score some points at the Ryder Cup.

Number 5 in world rankings, Schauffele is Mr. Consistency. In 2021, he had 8 top 10 finishes. Despite his slight stature, he pounds it an average of 307 yards off the tee, which will be extremely helpful on the Whistling Straits set-up. Oh, did we mention he won the Gold Medal at the Tokyo Olympic Games.

Spieth had a resurgent year in 2021 and got back to playing consistent great golf. He climbed back to being the No. 14 in the world rankings. A three-time Ryder Cupper, he has a 7-2-2 record, not including his 0-3 singles mark. This will be Spieth’s fourth straight Ryder Cup appearance. He also plays Whistling Straits well and was the runner-up at the PGA Championship there in 2015.

Ranked No. 16 in the world, Berger is a Ryder Cup rookie. In 2021, he had eight top-10 finishes in 23 events. Stricker describes him as “a classy, gutsy guy with a never give-up attitude.” He’s playing well right now with T-11 or better in his last five events.

Tony had another consistent year and finally got over the hump of second place finishes with a victory at The Northern Trust. One of the most likeable guys on the Tour, Finau can be paired with just about anybody. Finau was 2-1-0 at the 2018 Ryder with an impressive singles win over Tommy Fleetwood.

A surprise captain’s pick, Scheffler in 2021 finished in the top 20 in all four majors, including three top 10s. He proved his match play ability at the Dell Technologies Match play at Austin CC when he made it to the championship match, along the way he beat European Ryder Cup nemesis Ian Poulter and Jon Rahm, the number one golfer in the world.

He had a fab 2021 with two victories (Travelers and Sentry Tournament of Champions), a 3rd place finish at the U.S. Open and 8 top 10s in 26 events. He has a consistent tee-to-green game and can really knock out birdies in bunches.

Up to 30% Off Callaway Pre-Owned  Select Drivers, Woods, Hybrids, Irons, Wedges and Putters

Nobody on planet earth has been playing better than The Rahmster the past few months. He recently won the points-based player of the year award from the PGA of America. No. 1 in world rankings and the 2021 U.S. Open Champion, Rahm had an amazing 15 top 10 finishes in 2021. Oh yeah, he also hits it 309 yards off the tee and is first in birdie average and scoring average on the PGA Tour. Rahm’s claim to fame in Ryder Cup is his takedown of Tiger Woods, 2 & 1, at the 2018 Ryder Cup in Paris.

While he’s dropped to No. 13 in world rankings (he once spent 100 weeks at No. 1), Rory is still recognized as one of the best golfers in the world. This will be Rors’ sixth Ryder Cup so he brings a wealth of experience to the matches. He’s played in 24 matches with a 11-9-4 record. At 319 yards average of the tee (2nd on the PGA Tour), McIlroy has the length to play Whistling Straits well. Don’t forget, too, he’s a flat out birdie machine and is ranked No. 1 on Tour birdie average with 4.51 per round.

A certifiable star at the 2018 Ryder Cup, Fleetwood won all four matches with his partner Francesco Molinari on French soil. His only blemish was losing to Tony Finau 6 & 4 in Sunday’s singles match. Fleetwood is universally regarded as a gamer and clutch player and he’ll be a formidable opponent in the fourball and foursome matches.

One of the best young players in the world, Hovland, 23, has already moved to No. 14 in world rankings with a superb 2021 season that included one victory (Mayakoba Golf Classic) and seven top 10 finishes.  Hovland is sneaky long off the tee with a 302-yard average and he makes birdies in bunches with 4.4 per round (6th in birdie average on the PGA Tour).

Uh oh, Poults is back! He’s been a thorn in the USA team’s side for the six previous Ryder Cups. Need a clutch putt or chip and Poults always seems to deliver followed by one of his screams and double fist pumps. He has an outstanding 14-6-2 Ryder Cup record and has never had a singles defeat. His most notable performance was in 2012 at Medinah CC when he won all four of his matches and Europe came through with one of the event’s most amazing comebacks. He got the nickname “The Postman” there because he always delivers.

When Americans see Garcia on the European team it’s time to worry. At age 41, the 2017 Masters Champion, is the winningest golfer in Ryder Cup history with 251/2 points and a 22-12-7 record. When the Euros need a clutch putt or a motivating speech to his fellow team members, Garcia never disappoints.

The 2019 Open Championship winner is a world-class player and is not intimidated by the big moments. Unbelievably, Lowry is a rookie and this will be his first appearance in Ryder Cup matches.

Westy is back! He had a phenomenal resurgence in 2021 with second place finishes at THE PLAYERS and Arnold Palmer Invitational and a T13 at the 2020 U.S. Open. Westwood has been on ten consecutive Ryder Cup teams, including seven that were victorious. He has a 20-18-6 Ryder Cup record. Westwood only needs to play in two matches at this year’s Ryder Cup to tie the record number of matches for Team Europe currently held by Nick Faldo.

Hatton plays with lots of passion, which makes him an ideal team member for the European squad. While his Ryder Cup record is 1-2-0 in his first Ryder Cup appearance in 2018, Hatton, no. 17 in world ranking, brings the focus and enthusiasm that has been the hallmark of Europe’s impressive success in past matches.

The 27-year old Englishman, who resides in Jupiter, Florida has played lots of golf in the U.S. He had five top 10 finishes on the PGA Tour in 2021 and has six career international victories. He also won the U.S. Amateur in 2013. This will be his second Ryder Cup after his debut in 2016.

There is a tendency to dismiss guys like Wiesberger who aren’t well known in the U.S., but he’s exactly the kind of no name that rises up at the Ryder Cup and delivers big time. The 35-year old Austrian has 10 international wins and is 61st in world ranking.