Home  >  Uncategorized  >  What Tiger Woods Should Do Next? 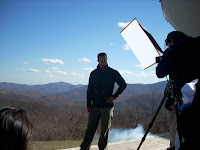 After watching Tiger Woods’ press, err, prepared statement conference, on Friday, there’s little doubt his head is probably spinning with all the advice he’s been receiving lately. After all, the audience in that weird room with the blue curtain and wood lectern appeared to be full of corporate and sports rep types who probably had a hand in orchestrating the entire performance.

Up to this point, I’m convinced Tiger and his advisors have made nothing but bad moves in dealing with the biggest crisis in his life.  I strongly disagree with the current structured approach by him and his handlers, which seems like a desperate attempt to hang on to his crumbling corporate image. Let’s face it, too many corporate entities have a vested interest in returning Woods to his lofty perch among America’s most trusted athlete endorsers.

Once Woods matriculates from rehab, I suggest he turn his back on all the corporate hangers on and everybody else making money off of him. If I were Woods, I’d build an entirely new life that would enhance the possibility of solidifying his family life and build on his already regal golf legacy. Here’s my multi-step process I suggest for Mr. Woods:

Move to Sweden—The only way to keep the celebrity websites, newspapers and television shows away from your family and your personal life is to leave the premises. These people know how to hide in bushes and pay off bartenders and cocktail waitresses so Tiger will never have any sense of freedom here in the U.S. His kids will grow up in relative anonymity in Sweden and his wife will be near her family, which should help his marriage and be a minor payback for the turmoil she’s had to endure. Swedes are essentially private people who won’t invade your space and Stockholm is a cosmopolitan city of 2 million residents so it should be a nice easy going lifestyle, though he will need a couple of parkas during the winter. During the summer, daylight lasts till 10 p.m. so there’s lots of extra time to play with the kids and practice nine iron approach shots.

Dump all Endorsements Tomorrow—Get rid of all your endorsements and corporate agreements and start all over. Tiger won’t be beholden to anybody and he’ll have a sense of freedom. The only person he’ll have to answer to everyday is the person in the mirror. Instead of having a bunch of yes men who’re dependent on him for their next paycheck, he’ll control his own destiny and image.  Tiger needs to become his own man, not one beholden to Corporate America. Woods is the best golfer on the planet. He can make more than enough prize money to have a good life. Instead of doing obligatory corporate meetings and promotions, he can spend more time with his family and practicing golf. He should downscale like the rest of America and sell his real estate holdings, yacht and other toys. Instead of chasing money, he should put the emphasis back on developing a simpler more enjoyable life for his family and winning golf tournaments. Sucking up to corporations for endorsement dollars and doing silly television commercials is a fame and fortune trap he doesn’t need anymore.

Play Golf Globally—To stay out of the limelight in the U.S. and to escape the tabloid media, play the world’s major tours in Europe, Australia and Asia. Woods is a great enough golfer that he can earn enough money to have a decidedly upscale lifestyle without having to play the PGA Tour and be constantly harassed by the press. With no endorsement contracts he won’t have to play a certain amount of events. Plus, his name still sells tickets and there will be more than a few tournaments offering large appearance fees.

Play Only the Majors in the U.S.—The only tournaments Woods should play in the U.S. are the four majors, which would still enable him to reach Jack Nicklaus’ record. If there’s one thing Woods wants to accomplish in his career, it’s Jack’s Major championship record. Just play the four big ones each year and be done with it. With the British Open, that would mean Woods would only have to play three tournaments a year in the U.S. The more he stays away from the tabloid websites, blogs, newspapers and television shows the better.

Become a Coach—With no corporate responsibilities and a limited PGA Tour schedule, Woods will have more than enough time to coach his kids’ sports teams. He can serve the same role to them as his father did to him. Tiger will quickly see it’s a more fulfilling role than that of a corporate shill and he’ll build a great relationship with his kids that will last a lot longer than any of the toys he can buy with his corporate bucks.