With only four Majors a year, golf fans craving more high-level excitement should look to some of the best non-major golf events. The 10 Best Non-Major Golf Events encompass everything from what many consider to be the unofficial 5th major to the PGA TOUR Championship as well as international pro-ams and made-for-TV events brimming with marquee name golfers past and present. 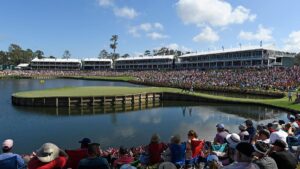 Even with Greg Norman trying to minimize PGA TOUR events, THE PLAYERS at TPC Sawgrass in Ponte Vedra, Florida in March still has the strongest field in all of golf. Head to the range before tee times and you’ll see Top 50 players lined up like a Who’s Who in professional golf reception line. There’s some serious money on the line at THE PLAYERS, which has a total purse of $25 million (up from $20 million in 2022). For players, it’s the ultimate five hour exam that quickly identifies the contenders from the pretenders. Narrow fairways with tiny target areas, immense strategically placed waste bunkers, railroad tie barriers, grassy mounds and knolls and pool table-fast greens are just some of the elements players must deal with on the Pete Dye designed 7,215-yard, par 72 layout. For spectators, many fairways are framed by high, banked slopes upon which crowds can sit. There are also bowl-shaped natural grass amphitheaters around many greens where you can watch putts break wildly in either direction. The huge crowds, gigantic purse and overall vibe makes THE PLAYERS feel like a major. For more info., click THE PLAYERS 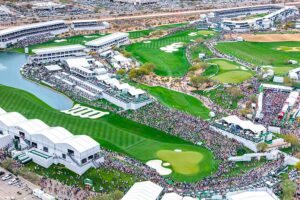 This rollicking, fun-filled tournament has been described many ways. My favorite is a take on the old Florida vs. Georgia football moniker, “The World’s Largest Outdoor Cocktail Party.” Contested in February at TPC Scottsdale, it’s the PGA TOUR’s best attended event drawing over 600,000 fans each tournament week. There’s nothing quite like the wild and crazy scene at the par-3 16th hole, a modern day Roman Coliseum of sorts with golfers replacing gladiators in the arena. Hit it near the hole and loud roars erupt – shank a tee shot and get ready for boos to rain down unmercifully. Don’t miss the hugely popular pro-am, which featured stars like Michael Phelps, John Elway, Larry Fitzgerald and Darius Rucker in 2022. Cool, too, is the free admission on Monday and Tuesday. If you want your golf experience to be more like a college football game, this is the tournament for you. For more info., click WM Phoenix Open. 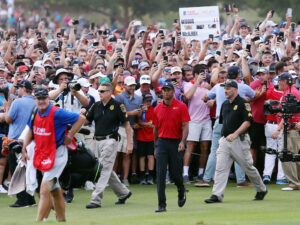 Staged in late August at East Lake Golf Club in Atlanta, the TOUR Championship is the final event of the FedEx Cup playoffs. With a star-studded field of just 30 players, it’s easy to roam the fairways and see the best players in the world go mano e mano for an amazing stash of cash (more than $20 million first prize).  East Lake Golf Club, home course for Bobby Jones, is a historic, classic course that puts a premium on shotmaking. It’s located 5 miles east of downtown Atlanta. For more info., click TOUR Championship 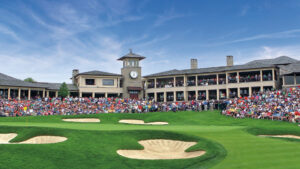 Hosted by Jack Nicklaus, The Memorial always draws a strong field. As a PGA Tour Elevated Event, the field is expected to be even stronger in 2023. Staged in late May/early June at the Muirfield Village Golf Club in Dublin, Ohio, a suburb of Columbus, the tournament was founded by Jack Nicklaus in 1976 and the course was designed by the Golden Bear. As an “Invitational” tournament it has reduced field of 120 ((as opposed to full-field events with 156 players). Nicklaus is involved in selecting the players and the field is always exceptionally strong for a non-major. Nicklaus’ dream was to design a course that was basically Augusta National Jr. Muirfield Village G.C. is exceptionally maintained and is set up to accommodate large crowds. The entire setting exudes excellence, Nicklaus style. For more info., click The Memorial Tournament 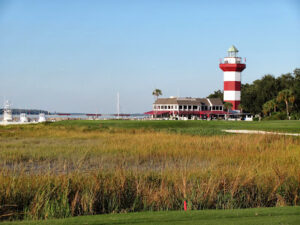 The Harbor Town Golf Links course is the superstar here.  While the field is admittedly not the strongest, the golf course and expansive scenic setting on Calibogue Sound make it a joy to walk. Risking a scolding and impending arrest from the hyperbole police, I view Harbour Town as a course with the elegance of Augusta national, the pine scented ambiance of Pinehurst and the water panorama excitement of the Ocean Course at Kiawah Island. Like Augusta National, you’re so familiar with many of the holes at Harbour Town that you feel like you know the course even if you’ve never played it. It’s a perfect test for the pros. With tight fairways and small greens, you must control your accuracy and trajectory and be able to work the ball left or right to score well. This is Old School golf in that shotmakers not grip and rip it types are more likely to emerge victorious and wear the winner’s plaid jacket on Sunday. For more info., click RBC Heritage 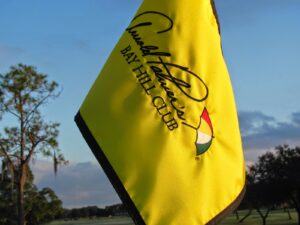 If you love Arnie and who doesn’t, you must to attend this tournament. From the stunning statue of  “The King” near the first to  tee the the massive putting green where he used spin tales about his glorious career, the tournament has an amazing Tour stop ambiance that radiates everything great about professional golf, game Palmer was instrumental in popularizing, and the PGA TOUR. Bay Hill”s Championship Course reflects the personality of Palmer, one of the modern era’s most daring and aggressive players. The course, which sweeps along the shores of the Butler Chain of Lakes, is long with a good number of tight fairways. The most talked-about and best spectator holes are the final two. The seventeenth is a 221-yard par-3 with a large green protected by water and treacherous pin positions. One of the best finishing holes on the PGA TOUR, the eighteenth, a 458-yard, par-4 is as picturesque as it is challenging. For birdie, you must hit an accurate mid-iron shot over water to a huge, undulating green bordered by deep bunkers on the left side. For more info., click Arnold Palmer Invitational 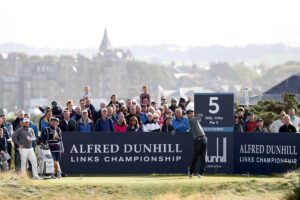 The venues for this annual DP World Tour (formerly known as the European Tour) event in early October are unbelievable. The tournament is played on the historic Old Course in St Andrews, Kingsbarns, often referred to as the “Pebble Beach of Scotland, and the legendary Championship at Carnoustie. The field is an impressive one with the likes of Rory McIlroy, Padraig Harrington, Tommy Fleetwood and Billy Horschel among the players in 2022. Unlike the Open Championship at the Old Course or Carnoustie, the crowds are smaller and you have a much better chance of seeing the action up close and personal. Following players on Kingsbarns is a supreme treat. Set 8 miles from the village of St. Andrews, this innovative but classic design is truly one of the world’s most outstanding seaside golf experiences. A testament to modern design techniques, American designer Kyle Phillips created the dunes and rolling land movement at Kingsbarns with earth scrapers and bulldozers in 2000. For more info., click Alfred Dunhill Links Championship 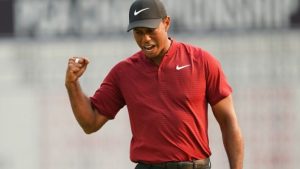 Private Riviera Country Club in Pacific Palisades, 18 miles west of downtown Los Angeles, home to the Genesis Invitational, has a star-studded membership highlighted by celebs like Tom Brady, Mark Wahlberg and Luke Wilson. Yet, the real stars for the tournament are Tiger Woods, who is the host, and the classic, Old School golf course built in 1926. It’s a true shotmakers course that demands a wide variety of shots and forces the best players in the world to shape shots and utilize more brains than brawn. The PGA TOUR has designated it as an Elevated Event which, with Tiger’s presence as well, assures a strong field. The magnificent setting with the familiar Mediterranean style clubhouse overlooking the 18th hole make The Genesis one of the TOUR’s marquee events. It sure doesn’t hurt to have Tiger hosting the event and making sure everything is first class for the players and spectators. For more info., click The Genesis Invitational. 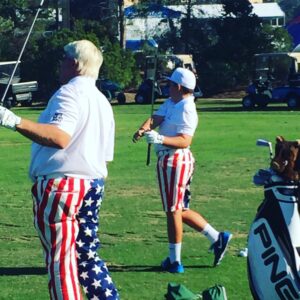 From Tiger Woods, John Daly and Annika Sorrenstam to Lee Trevino and Nick Price, the fairways at the Ritz-Carlton Golf Club in Orlando are teeming with golf icons at the PNC Championship (formerly known as the PNC Father & Son Championship), which is staged every December. The unique tournament joins 20 of golf’s legends with their son or daughter in a professional competition. If you want to see some of golf’s biggest and most popular stars up close and personal, I highly suggest you attend this tournament. The stars are very approachable off the course and the crowds are limited so you’re often just a few feet away on tee boxes and greens from some of the greatest players who’ve ever picked up a club. Better still, the tickets are reasonably priced. This year’s tourney (2022) will feature Annika and her son and Jordon Spieth and Nelly Korda and their fathers for the first time and hopefully Tiger Woods and his son, Charlie, who have been a huge hit the past couple of years. For more info., click PNC Championship 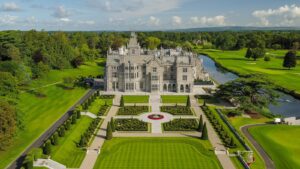 Played at Adare Manor in Ireland in early July, this is far from being an ordinary pro-am. First it’s contested at Adare Manor Hotel Golf Club in Limerick, a spectacularly maintained lush layout that has often been described as Ireland’s answer to Augusta National. If you’re looking for an epic field, rest assured, JP McManus delivers every year. In 2022, the field included Tiger Woods, Scottie Scheffler, Jon Rahm, Dustin Johnson, Jordan Spieth, Justin Thomas and Rickie Fowler to name a few. Among the celebrities playing were Niall Horan, Bill Murray and Jamie Dornan. It’s definitely one of the coolest tournaments on Planet Earth. For more info., click JP McManus Pro-Am.