Golf is a fun and challenging game unless, of course, you’re stuck playing with one of these guys:

1. Ball retriever guy--This guy is out to find Pro V’s. If there’s lots of water on the course, get ready, because this entrepreneur of the links is going to pull out the ol’ fifteenth club and try to make some big money. He’s after high-end balls that cost nearly $50 a dozen. 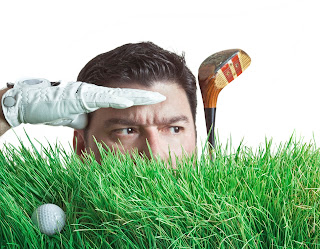 2. Hacker/Duffer that gives unsolicited lessons guy–He’s always off balance, hacks at the ball like a lumberjack and can’t find a fairway. Amazingly, though, he channels David Leadbetter and Butch Harmon to explain the golf swing to you. His vast knowledge is never asked for, however, he thinks you’re just too polite to ask. Even with your suspect swing, you can beat the guy, but that doesn’t seem to matter to this wannabe golf swing guru.

3. Doesn’t give a damn about the course guy–Divot repair tool. What’s that? This insensitive boor never replaces divots, fixes ball marks or rakes traps. The same guy usually parks his cart on the fringe of the green, disregards the 90 degree rule when nobody’s looking and flips his cigarette and cigar butts on the tee.

4. Cell phone/social media guy–This annoying gent is always closing a business deal, yapping with his wife or making dinner reservations on his phone while trying to play golf. He’s adept at chipping and putting with his phone up to his ear. He never bothers to put the phone on “silent” and takes important calls while others are hitting shots. Social media guy is always taking pictures to post on his Facebook page and tweeting to his peeps about the attractive cart girls.

5. Cart girl pick-up guy–This always-on-the-prowl Romeo can’t resist laying on the charm with the cart girl. Master of cheezy pick-up lines, he usually delivers gems like this: Excuse me, but I think I dropped something…My Jaw! Or the never successful: Do you believe in love at first sight, or should I walk by again? Cart girl pick-up guy always strikes out at nightclubs, but for some reason he thinks his overplayed schtick will work on the golf course.

6. Can’t remember score guy–After every hole, this guy starts replaying the hole by counting up all of his strokes. He never, and I mean never, just recites his score. It’s always: “Let’s see, I had one in the water, two in the bunker and three putts.”Hmm, put me down for a par.

7. Boozer guy–He never plays golf without a little extra rocket fuel. Boozer guy always has to have a drink nearby. He never leaves his beer or cocktail in the cart. Rather, he takes it with him to every shot and carefully and methodically places it down near the ball before he hits. After an errant shot off a pool screen or a roof top, boozer guy takes a big swig, smiles widely and says, “Where the hell is the bartender, I mean cart girl. I’m running out of booze and I can’t hit straight without it.”

8. Out-of-control temper guy–Typically this is a high-handicapper who plays about four times a year and hits a couple of buckets at the range every six months or so. For some reason, he thinks he should be striping it like the pros. When he doesn’t, he throws clubs toward the golf cart, violently pitches balls into lakes after missed putts, kicks empty beer cans and cusses incessantly.

9. Lazy cart guy-He never walks. Ever. If you have to drive the cart a few yards away to hit your ball, he’ll always wait to you return, because, well, walking a few steps on the golf course is just too taxing. When he gets in the cart on the first tee, rest assured, he’s not getting out unless he’s hitting a shot a few feet away or retrieving a brewski from the beverage cart. Lazy guy has never walked a golf course in his life and has no intention of ever doing so.

10. Cheater guy–Master of the foot wedge, deep bunker grenade shot, and others, cheater guy doesn’t know how to count every stroke or play the ball as it lies. His classic line: “Hey, put me down for a …” Yeah, but what about those two in the water? Doesn’t matter with cheater guy, he has a number in mind that he wants to shoot and, darn it, he’s going to shoot that score by any means possible.

Looking for a great lightweight, easy-to-carry bag ideal for short courses, par threes and hitting a few clubs on the range?

I highly recommend The Loma Bag By Sunday Golf.